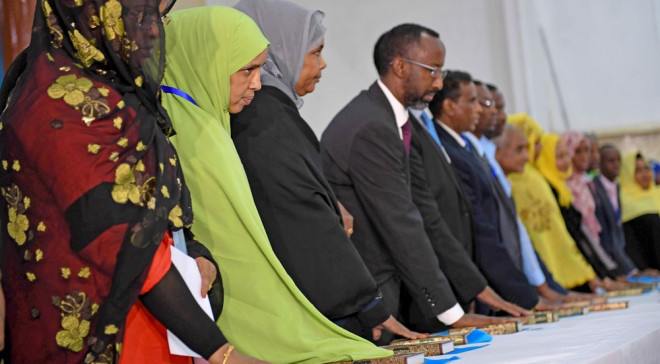 MOGADISHU, Somalia - Despite being a patriarchal community, Somali women are determined to leave an indelible mark in governance, a new study shows, in yet a complete shift from traditions that were at times dismissed as "archaic and retrogressive" by gender inequality critics.

In the just recently concluded election, several members of the international community and other stakeholders pushed for inclusivity, for women, especially on much-needed women representation but unfortunately, the women much needed 30 percent quota was not achieved in elective seats.

For instance, despite efforts by the women needed women to participate in the election, in the Senate, women’s representation in the 2021/22 election increased from 24% to 26%, while it decreased in the House of the People from 24% to 20% according to the study carried out by Heritage Institute of Policy Studies.

Once elected, the report shows, women confronted a parliament, where the laws and policies were inconsistently applied by the largely male leadership, and they were sidelined and relegated to committees that were considered irrelevant.

But on a positive note, in the last election, women made some headway as MP Sadia Yasin H. Samatar was elected as the first deputy speaker of the House of the People, the first time a woman has held this position. In the presidential election, a woman Member of Parliament, and former deputy prime minister, MP Fawzia Yusuf H. Adam competed against 38 men.

Also, the study concluded that a large majority of survey respondents (80 percent) believed that Somali women should take part in the governance of their country.

This was a surprising finding and in contrast to the elite narrative that there is societal opposition to women’s political participation.

Survey participants also identified raising awareness, civic education, reporting, reporting, and financial support as the most important initiatives to encourage and promote women’s political participation, the report noted, what could motivate women to continue fighting for their space in governance.

According to the report, cultural practices also hinder women’s struggle for political representation and leadership. Somali society is patrilineal and patriarchal which give believes men uphold the clan lineage and leading authority and give leadership men.

The country had been using a clan-based model of elections which highly secludes women. The clan patriarchal institutions, especially the 4.5 clans power-sharing agreement, are biased against women, the report further noted.

The safeguarding mechanisms as well as tremendous advocacy and lobbying efforts of the women’s movements, civil society organizations, and pressure from the international community during the 2016-17 electoral process, resulted in female representation rising from 14% to 24% in each of the houses of the parliament.

The study identified two major hurdles which make it difficult for women to make progressive steps in the political environment. First is access to economic support for women running for office. While men relied on clan members and wealthy business owners for financial assistance, women self-funded their campaigns, selling property or jewelry.

The second hurdle for women’s political participation, the report established, is the 4.5 clans' power-sharing agreement and the collusion between clan elders, religious actors, and male politicians. Other challenges included weak institutionalization of the parliament and women MPs' inability to collaborate with each other.

But in the last election, women candidates and advocates employed a variety of strategies to overcome these challenges. Before every election, women lobbied to ensure that the gender quota was implemented.

Also, prominent civil society activists were appointed as Goodwill Ambassadors in the 2016 and 2021/22 elections to monitor the implementation of the gender quota and call attention and action to election bodies, federal and regional governments, and the international community.