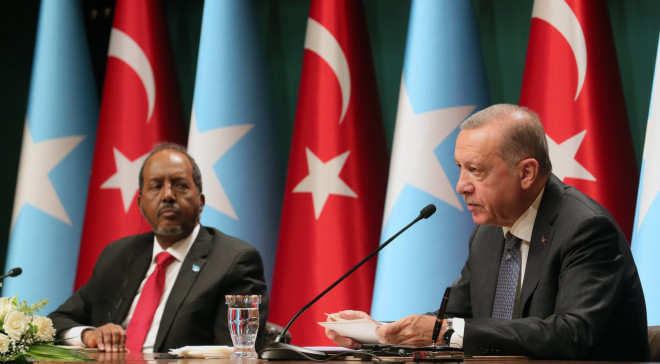 ANKARA - Somalia is the main example that shows the importance Turkey attaches to the economic development, social peace, and stability of the African continent, President Recep Tayyip Erdoğan said Wednesday.

Speaking at a joint press conference with his Somali counterpart Hassan Sheikh Mohamud in the capital Ankara, Erdoğan said that Turkey has provided more than $1 billion worth of humanitarian aid to Somalia in the last 10 years.

Turkey's joint steps taken with the Mogadishu government in 2011 have helped Somalia revitalize, as the country was on the brink of collapse, Erdoğan also said.

"In 2011, Somalia was on the brink of collapse as the international community articulated. So in 2011, we paid an official visit to Somalia with a large delegation to extend a message to the world that we are standing with our Somali brothers and sisters," he added.

Noting that the joint steps taken with Somalia have aided the country to revitalize and develop even further, Erdoğan said the bilateral trade volume reached $363 million last year, which was only $2 million in 2013.

Turkey's largest embassy building in the world is located in the Somali capital Mogadishu, Erdoğan said, adding that his country is proud of it.

For his part, Mohamud thanked the Turkish nation for its investments in Somalia, expressing appreciation to Turkey and its people for the endeavor and efforts about the humanitarian situation his country has been facing.

Erdoğan welcomed Mohamud, who was on a four-day official visit to Turkey, with an official ceremony at the Presidential Complex.

The leaders held one-on-one talks before delegation-level meetings followed by a signing ceremony and a joint news conference.

Earlier in the day, Mohamud visited Anıtkabir, the mausoleum of Mustafa Kemal Atatürk, founder of the Turkish republic, and laid a wreath at his gravesite.

Prior to his Ankara visit, the Somali president met with Somali soldiers receiving commando training in the western Turkish province of Isparta.

"I visited our brave soldiers undergoing commando training in Isparta, Turkey, with the assistance of the Turkish government," he wrote on Twitter.

"I met some great future Somali military officers & leaders & I am proud of them all. We are grateful to Turkey for this valuable security assistance," he added.

Bilateral relations and steps to enhance cooperation were mainly discussed in depth during the visit. This was Mohamud's first official visit to Turkey at the presidential level after taking office in May. He also served as Somalia's president between 2012 and 2017.

Turkey’s engagement with the African continent has been gaining pace over the years. Since taking office nearly two decades ago, first serving as prime minister, Erdoğan has been fostering ties with Africa, presenting Turkey as a fairer player than the continent’s former colonial powers.

Ankara has been stressing the desire to advance relations with the continent on the basis of a win-win relationship and equal partnership while observing mutual respect. Both sides have been vowing to tap into their greater potential when it comes to further expanding and deepening relations.

The Ankara-Mogadishu partnership is "extremely positive and growing by the day and by the night," also said the visiting Somali president on Tuesday.

Speaking at a panel titled "Benefits of the Turkey-Somalia Partnership," Hassan Sheikh Mohamud said: "Among the key benefits of Somalia's relationship with Turkey is a strong political and diplomatic connection, and cooperation in the fight against global terrorism."

He said the centuries-old relationship between Somalia and Turkey is based on respect and cooperation, adding that "the whole world was astonished" when Erdoğan paid a visit to Somalia in 2011 at the height of a humanitarian crisis in Mogadishu.

In every meeting with Erdoğan, Turkish government officials, civil society members, and the business community, Somalia is "seen as more than just an opportunity," Mohamud told the panel held by the Ankara-based think tank Foundation for Political, Economic and Social Research (SETA).

Somalia has received support from all over the world for the last couple of decades, but Turkey's support is "unique and different," Mohamud said.

Fight against terrorism
Somalia has been struggling with the al-Qaida-affiliated international terrorist organization al-Shabab for 15 years, as it has harmed many lives in the Horn of Africa country.

The president stressed the importance of security for Somalia, saying: "We wanted to focus on building Somalia's core governance structures and systems to be as inclusive, transparent, and beneficial as possible to enable our country to be more unified, stable, and with sustainable development.

"Somali people will be at the core of implementing this vision. We know that it has also managed to do the heavy lifting for their own future."

This vision, he said, is a journey rather than a race. "Social cohesion on public trust in the national institution will take place. We have a social reconciliation agenda to reconcile our society in all their settings."

Mohamud said ending al-Shabab's violent insurgency requires more than a military approach, and his government will negotiate with the extremist group only when the time is right.

He said the Al-Qaida affiliate responsible for deadly attacks across East Africa had developed a "coping mechanism" against military aggression and could not be eliminated by force alone.

Al-Shabab has been seeking to overthrow the foreign-backed government in Mogadishu for over a decade and remains a potent threat despite efforts to defeat them militarily.

Mohamud said past approaches to al-Shabab had not worked, and his government was open to alternatives, including talks when appropriate.

"We are not right now in a position to negotiate with al-Shabab. We will, at the right time," Mohamud said.

"Even now ... we open the door for those who want to denounce the violence, the extremist ideologies and join the mainstream life in Somalia."

Al-Shabab fighters were driven out of Mogadishu in 2011 by an African Union force, but the group still controls swathes of the countryside and has the capacity to launch frequent and deadly strikes on civilian and military targets.

Mohamud said containing the militants in Somalia and degrading them militarily, the two key policies of past Somali administrations backed by foreign partners, had not proved enough on their own.

Al-Shabab had "developed a coping mechanism so that even if their facilities are destroyed, they have the capacity to reestablish it again" and return to the battlefield, he said.

The former academic and peace activist said that cutting off al-Shabab's financial flows and countering their hateful message needed to complement a military approach to tackling the extremists.

Shortly after his election, Mohamud welcomed an announcement by U.S. President Joe Biden to redeploy American troops to Somalia, reversing a decision of former President Donald Trump to withdraw most U.S. forces from the fight against al-Shabab.