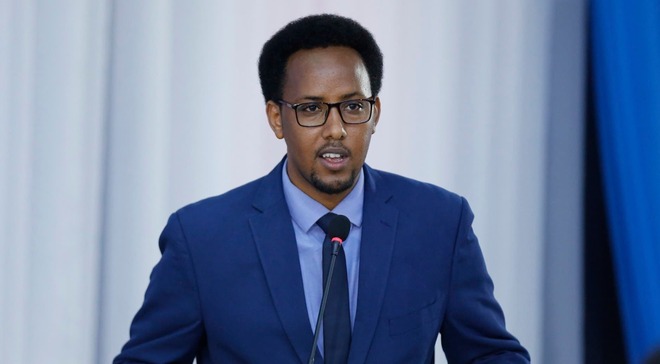 MOGADISHU, Somalia - Somalia President Mohamed Abdullahi Farmajo has on Thursday promoted a top official within the presidency, citing hard work and dedication as the major motivation, with just four months to the next elections, which have caused rifts among the political elites.

In a statement, President Farmajo promoted Director of Communications Abdinur Mohamed to Deputy Chief of Staff, a position which puts him as the second most powerful official within Villa Somalia, the official residence for the president, which at times serves as his office.

Abdinur Mohamed, a fairly controversial figure who has been calling shots on behalf of the president, was first appointed in 2017 moments after Farmajo won the elections, and has since been the official communication head of the presidency, a tough task that usually includes preparing speeches for the president.

The president hailed Abdinur Mohamed for his dedication and diligence, adding that he has confidence that he will perform well in his new roles. He will still be domiciled within Villa Somalia and will be responsible for the diary of the president and coordination of certain serious activities.

“Abdinur has displayed competence, hard work, and diligence. I wish him prosperity in this new position,” Farmajo said in a statement, adding that Abdinur has been an epitome of success who should be emulated by civil servants throughout Somalia.

The statement added that the president "has absolute confidence in the energy, vigor, and skills of the young folks in our country". The outgoing director of communications was a former journalist credited for serving in several high profile media houses across Somalia and abroad.

Mohamed’s role will also involve overseeing the management and coordination of the president’s programs and priorities including the delivery of projects and pledges according to the statement. The position is senior within presidential systems of government.

In a statement, Abdinur Mohamed also thanked the president for the surprise promotion. He pledged to continue working hard for the sake of promoting peace and stability in the country which has struggled with inter-clan conflicts and the Al-Shabaab menace for decades.

"I wish to thank President Mohamed Abdullahi Farmajo for this appointment. I am looking forward to repaying this work with trust and serving diligently with dignity and hard work," he noted in a brief statement.

Somalia is set to go for elections later on this year but a definite date is yet to be determined. The political brass is currently discussing the appropriate model and a series of aspects on the election laws, but Farmajo has expressed interest in defending his seat.