EDITORIAL: Ethiopia's peace must start with building trust among its people 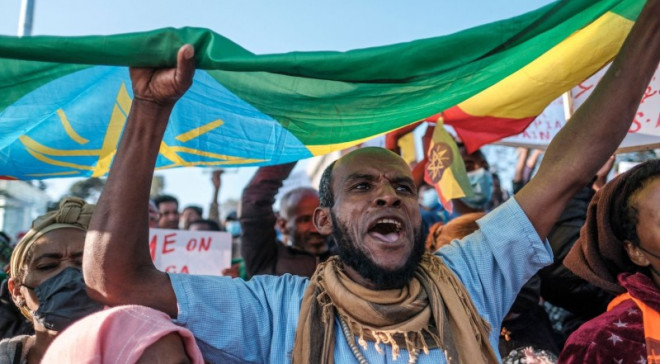 A demonstrator holds an Ethiopian flag as he takes part in a rally in Addis Ababa, Ethiopia on Nov. 7. EDUARDO SOTERAS/AFP VIA GETTY IMAGES

EDITORIAL | Ethiopia’s continual crisis has become everyone’s concern this week. But perhaps the conflict, now in its second year of destruction, hurts no one more than Ethiopians themselves.

Seeing calls for a ceasefire, dialogue, and political solutions mounting this week, we think that there is an important bit the world must understand on how to resolve the conflict.

As the most populous country in the Horn of Africa, Ethiopia’s sneeze means everyone else in the region will surely catch a cold. That cold may come in the form of hosting refugees, dealing with the illicit arms trade, and uncertain economic prospects especially for people enthusiastic about cross-border trade.

This week, US Secretary of State Antony Blinken, who has been on a tour of Africa, insisted that the conflict should be dealt with by all parties with grievances sitting at the table and discussing the problems. That could be ideal if parties were talking to one another at least.

In Ethiopia, both sides; the government under Prime Minister Abiy Ahmed and the rebel group Tigray People’s Liberation Front and its new allies Oromo Liberation Army feel they can win by eliminating the other side.

The biggest question now is how to convince either side that peace, not war will benefit both sides. Blinken, on his first tour of Africa, did recognize Abiy as a duly elected leader of Ethiopia. But he did say grievances raised by warring parties go beyond formal legitimacy and can only be ironed out through dialogue.

The US itself, incidentally, was host to a number of opposition groups who launched an alliance seeking to remove Premier Abiy. That is problematic because the US has been dangling sanctions on Ethiopia, warning they could be imposed if sides do not ceasefire.

For Ethiopia though, the dilemma is whether to be punished for sticking one’s ground or stay in a war whose victory is not guaranteed. And here is why the international community must focus on: Building confidence between parties to know that whoever they negotiate with will not undercut them. It is commendable to see regional leaders including President Uhuru Kenyatta insisting that the Ethiopian problem must start with protagonists seeing light in need of peace.

Ethiopia is a complex country; dozens of ethnic groups, one of the biggest populations in Africa, mostly young and poor people, and yet a history that goes back in centuries. With a culture as deep as Ethiopia’s, an imposed solution will surely be short-term and may even backfire with worse consequences.

Doing nothing will surely see an apocalypse on Africa’s oldest nation. Doing something without sensibilities to local needs will amount to mistakes we have seen so often elsewhere: Libya, Somalia, Syria, Afghanistan, name it.

For now, we will do better by asking Ethiopians what they really want. Do the protagonists want a power-sharing arrangement? Perhaps not. Do they want federalism or centralism? And do they want to make changes to their constitution to make it better governed? The endemic problems in Ethiopia are best felt by them. They should lead the way out of the situation.

Somalia’s insecurity, however, is complex and has been directly linked to existing poverty.

We welcome the contest, based on level, free and fair rules, and without violence, intimidation, or underhand games we saw delay this election cycle.

Let’s forget the chaos, and celebrate the good from parliamentary polls

Why we welcome sanctions on polls spoilers