Days after a leaked report from the UN Special Rapporteur on Eritrea indicated there was credible information that Somali youth training in Eritrea have fought in the Tigray war, new details emerged to confirm how the program was organized in secret and in violation of Somali laws.

Intelligence details obtained by Garowe Online, and confirmed by two people familiar with the plan and who were granted anonymity because they were not authorized to discuss the matter publicly, indicate that the decision to take the youth to Asmara was so clandestine that the recruits themselves were lied to, and their families kept in the dark about it.

It was unprecedented. The recruits, having been gathered from mainly minority sub-clans of Somalia, were initially hosted at Nur Shirbow School for training. The center is used by the spy agency, NISA, to provide basic training to its agents. But they were not being pulled in to gather intelligence to secure the country. They were being prepared to crush the opposition and engineer a power grab, new documents show.

So each group attending school was of youth numbering between 200 to 400 recruits. After this preparatory course, they were then airlifted to Eritrea at the tail end of 2019. Eritrea did not enter the fray until sanctions the UN Security Council had imposed on it were lifted late in 2018, allowing the country used to global isolation back in the Horn of Africa politics. But Eritrean military advisers, it turns out, had been visiting Deegaanleey NISA Training School outside Balcad district for assessment.

There was a third recruitment and training center in this clandestine program, identified at El Ma’aan, outside Mogadishu. The Eritrean military advisers ultimately decided against it, and subsequently shared their assessment with outgoing president Mohamed Abdullahi Farmajo and spy agency boss Fahad Yasin, pushing for relocation to Eritrea.

Thereafter, intelligence sources reveal, a decision was made to do the training in Eritrea as long as the program remained a top-secret, with only a few people aware of it. On the day the youth departed, even airport officials were barred from stamping or checking their luggage, in complete contravention of aviation safety rules.

They were brought in on buses and sent directly to the airside where aircraft awaited them to depart, without documents. In conventional practice, aircraft carrying passengers, whether military or civilian, have to share their passenger manifests. This was skipped too, meaning there is no record of who traveled to Eritrea for this program.

Recruits were misled into believing they were being sent to Qatar for training. The program, whose actual cost is unknown, was to be bankrolled by the government of Qatar. The emirate then immediately made a u-turn and abandoned the project for fear of international backlash. In January, Qatar’s Government Communications Office rejected any involvement in the program and called for an investigation into the matter.

“The State of Qatar condemns any abusive and duplicitous recruitment of any individual who was falsely told they were moving to Qatar for employment opportunities. The State of Qatar stands against such practices and urges all governments to investigate such abuses that make up human trafficking,” read part of the statement.

The then Prime Minister Hassan Ali Khaire, just like both houses of parliament, was kept in the dark. Samira Gaid who served as the senior security advisor to the then Prime Minister, through a recent interview on the matter, told Garowe Online it was not even usual for the PM to be involved in such military matters. “The office of the Prime Minister was unaware of the Somali youth dispatched to Eritrea for army training,” she said.
“The OPM is not usually involved in recruiting but rather in the policy and strategic guidance.”

Up to 7,000 recruits were needed, but details show an estimated 5000 soldiers were secretly taken to Eritrea. This training was endorsed by President Mohamed Farmaajo himself. But even in the current storm, only Information Minister Osman Dubbe has come forward to deny the troops fought in Tigray and criticized opposition groups for what he says is politicizing the military capacity building.

Strangely, the Somali National Army (SNA) leadership, except for a few trusted officers, was not involved in the recruitment drive. Former NISA deputy director Abdisalam Guled says there is a distinct recruitment procedure for NISA and SNA officers. "It is unusual for NISA to recruit 5000 officers and definitely has no role in the recruitment of the army," he says.

Farmajo, it has now emerged, used his close associate Fahad Yasin as the main coordinator. Farmajo and Fahad could not be reached for comment. Others involved are Abdullahi Kulane, the Deputy NISA Director, and Mr. Abdirizak Mohamud Haji Muhumud. Abdirizak has deep connections with Eritrean intelligence, having previously trained in Asmara, and is married to a woman from the Red Sea nation. Calls seeking responses to questions about Mr. Abdirizak's involvement weren’t answered, nor were messages to his mobile phone.

The documents further reveal, Abdirizak Mohamud Haji Muhumud, speaks fluent Tigrinya and is said to have coordinated the participation of the troops in the Tigray war, which left thousands of people dead, others violated and millions facing starvation. He grew up in Eritrea and is one of the people who cemented the relationship between the two countries.

Outgoing president Farmajo knew the military training was less about equipping the military, more about keeping him in power by crushing the opposition, and more importantly to capture Bu'ale, the designated capital of Jubaland state which is now under Al-Shabab control.

Eritrea, the choice of the training, has succeeded in crashing its opposition, runs on no constitution, has no elected leaders or independent judiciary. Its President Isaias Afwerki has never held elections in Eritrea’s history, making him one of the few Presidential monarchs in the world.

Were they going to learn something?

Since the program started, Farmajo himself has visited Asmara twice, with the state only releasing vague statements about “cooperation.”
The intelligence reports seen by Garowe Online say the actual intention was to also weaken the domination of certain ethnic and clans in the security apparatus in Ethiopia and Somalia. This could boost the strength of the leaders of both countries.

Although most recruits belonged to minority clans, many dominant clans signed up using dubious credentials, profiting from Somalia’s enduring lack of a citizen database. With elections in sight, the program was directly tied to manipulating elections. Incidentally, both countries did not hold elections on time.

Reports of troops in Tigray first emerged in February when Garowe Online published complaints by mothers who said they had not seen their sons in more than a year and did not know where their whereabouts. At the time, the government denied both the existence of the program and the participation of Somali soldiers in Tigray.

Even if officials admitted, it would be going against the country's provisional constitution. Somali soldiers can only fight in foreign wars with the approval of the Federal Parliament, according to Senator Abshir Ahmed, the Deputy Speaker of the Somali Senate.

According to him, the very existence of the program is illegal and argues he will pursue the families’ complaints with authorities. But beyond legality, Farmajo could come in for stronger moral scrutiny. Just how could he settle in Eritrea, a country with a questionable human rights record and which has never before been involved in peacekeeping missions or joint military training with other countries?

In public, Eritrea has sustained rejection of claims about their own military’s atrocities in Tigray as well as drafting of Somali youth to the battlefront. Yemane Gebremeskel, Eritrean Information Minister accused certain media houses of “lies” through what he said was “recycling of horrid stories” about his country.

Eritrea, however, did not let in the Special Rapporteur to verify. He said in the report that they did not simply agree to discuss the matter.
“The Special Rapporteur has also received information and reports that Somali troops were moved from military training camps in Eritrea to the frontline in Tigray where they accompanied Eritrean troops as they crossed the Ethiopian border. It's also reported that Somali soldiers were around Axum,” the report said.

After the details of the Axum massacre emerged, Somalia, Ethiopia, and Eritrea came under sharp international rebuke.

Axum city is considered a holy shrine in northern Tigray in Ethiopia. Multiple reports published by various rights groups and international media revealed mass killings that targeted worshippers in the town in November last year, mostly innocent children and women. The mass killing went on for three weeks and it's at this time information leaked about the presence. 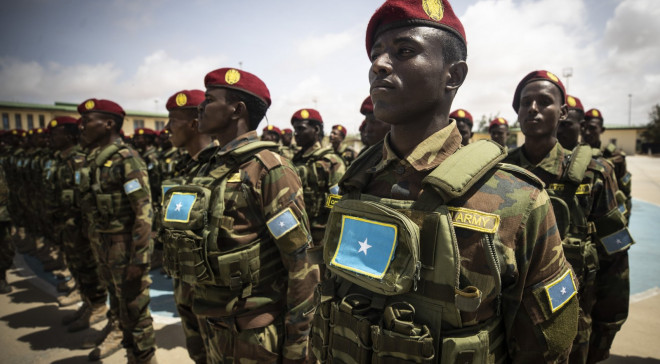 Somalia, the report says, should create a single Somali boot camp within the country where all new recruits undergo their first, official basic military training. 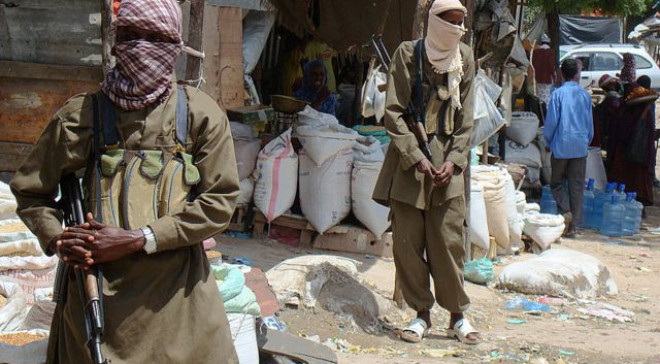 The US has also increased the number of rewards for those who can positively identify Al-Shabaab taxation bases in Somalia. 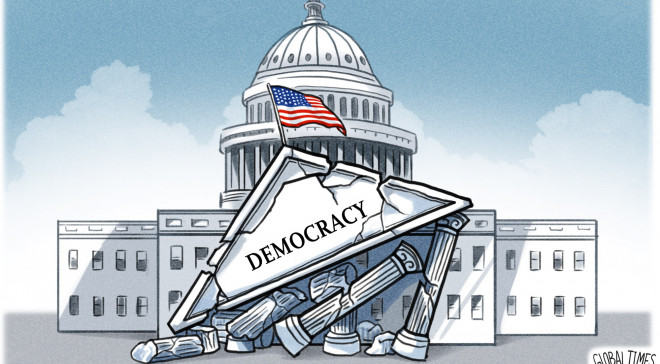 US democracy at risk, a new Report now reveals 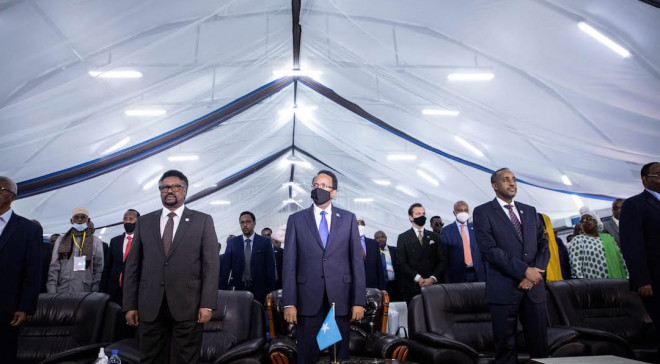 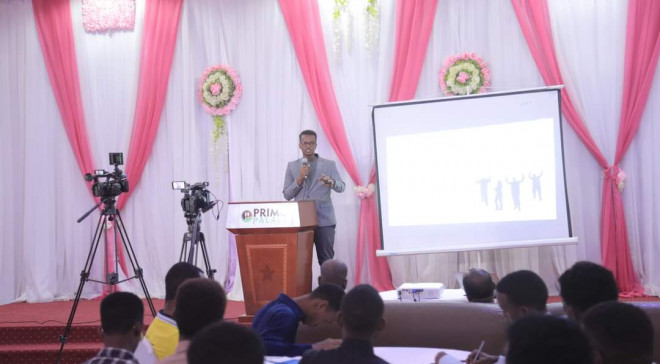 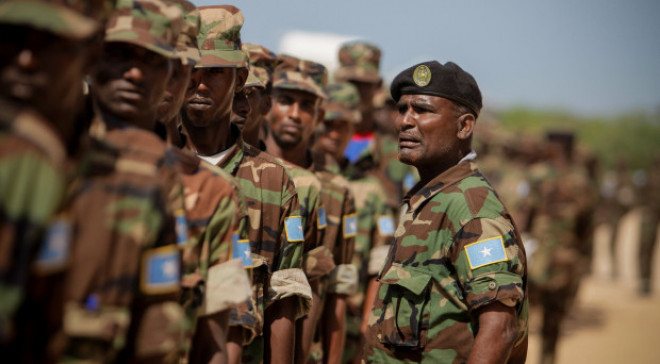