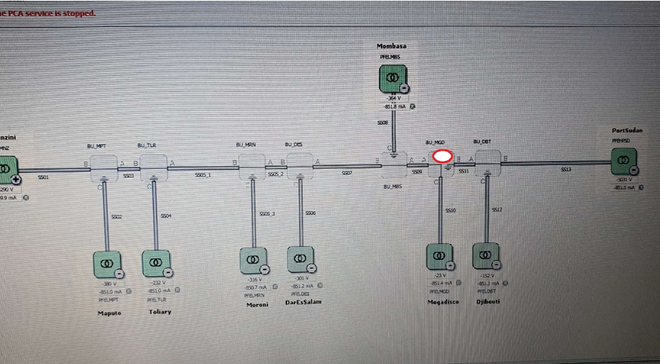 MOGADISHU, Somalia - Internet service has temporarily been restored to South and Central Somalia after Eastern Africa Submarine Cable System (EASSy) remotely switched on the branching unit by re-configuring the power set-up temporarily as Sudan is isolated for now.

Because the fault proved to be at sea, EASSy decided to perform a BU switch to restore traffic, and traffic cleared from 13:52UTC on 27 July 2020, according to a report to the Ministry of Post, Telecom and Technology (MPTT) by Dalkom Somalia, a local affiliate of EASSy Consortium.

The Ministry is further informed that the EASSy Consortium, in the meantime, mobilized an e-marine repair vessel to undertake the repair at EASSy Segment 10, which is calculated at about 27km from the Mogadishu BMH (See attached photo).

H.E. Abdi Ashur Hassan, the Minister of Post, Telecommunications, and Technology thanked Dalkom Somalia, Hormuud Telecom, and other operators for their timely response to this incident. He, however, asked the operators to be more vigilant until the issue is finally resolved.

The minister reiterated his call for companies to invest in more fiber optic cables to provide redundancy and reduce our dependence on a single fiber optic cable because Somalia’s economy is gradually becoming more internet-based as banks, money transfer, education, airline, media, and some government services, mainly depend on the internet to provide their services.

“We call on the companies that are in the process of bringing other fiber optic cables to speed up their work because that will not only provide them a good market penetration opportunity but also be part of the long-term solution to similar incidents,” concluded the Minister.

We will provide more updates as they become available.