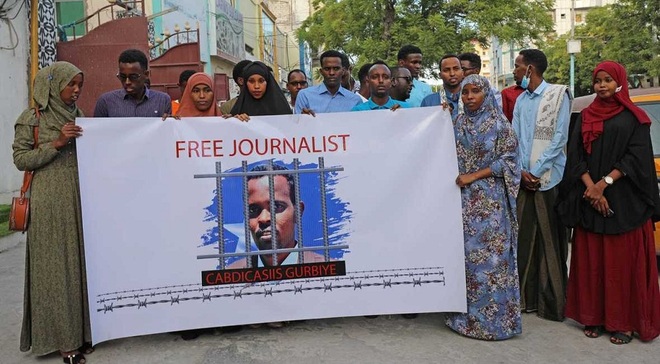 The Federation of Somali Journalists (FESOJ) condemns the conviction and prison sentence handed down today against the deputy director of Goobjoog Media Group charged under articles 328 and 269 “Publication or circulation of false, exaggerated or tendentious information capable of disturbing public order” and “Condition of reciprocity” of Somalia’s harsh and outdated Penal Codes which had come into force in 1964.

With the presence of FESOJ and journalist members today, July 29, 2020 in Banadir Regional Court, the presiding judge Mohamud Yasin said he found guilty of journalist Abdiaziz Ahmed Gurbiye by breaching articles 328 ,269 of penal code and sentenced six-month jail term which can be bought o converted into fine and five million of Somali Shilling, equivalent to 200 $.

The sentencing of the journalist is referred to provisions of the Somali Penal Code, comes at a time when the President of Somalia Mohamed Abdullahi Mohamed “Farmajo” had publicly committed to reforming outdated provisions in the country’s criminal code. He also said his administration supported ending the use of criminal law against journalists.

According to defending lawyers Dahir Mohamud, Barre Osman and Ahmed Abdirahman Dirie, the conviction of the journalist is illegal and is directly violating of the Provisional Constitution of Somalia that fully guarantees freedom of speech and of the media and individual level every person has a right free to express his opinions independently.

The accusations stemmed from Facebook posts Abdiaziz made personal page that he manages, in which he alleged the government had mismanaged its COVID-19 response, and criticized President Mohamed Abdullahi Mohamed Farmaajo.

FESOJ calls for the sentence to be overturned and for journalist Abdiaziz Ahmed Gurbiye to be released immediately pending appeal.

Condemning the sentence meted out to Abdiaziz Ahmed Gurbiye, the Secretary General of FESOJ, Mohamed Ibrahim Moalimuu described the six-month jail sentence as “a brutal and outrageous decision, and a flagrant violation of free expression”.

“We condemn this harsh and unacceptable sentence which takes media repression in Somalila to record levels. We will continue to support our colleague until he gets his freedom back and the verdict to be overturned,” Moalimuu said.

“This ruling appears to be being pushed back by the senior official from Federal Government of Somalia. The main purpose is to intimidate journalists who are accountable to government. Somalia has constitutional guarantees of freedom of speech, but journalists here say they are increasingly facing intimidation aimed at stopping them from running stories critical of President Mohamed Abdulllahi (Farmaajo) and his administration” FESOJ President Abadir Abdulkadir Elmi said.