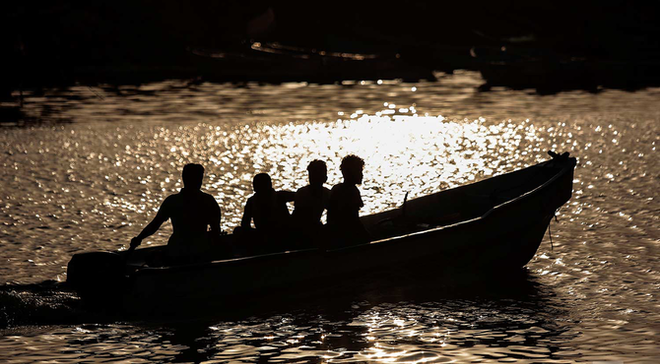 The seven fishermen were asleep on the vessel in a sheltered breakwater in Xaafuun in the northeast of the country when the storm — Somalia’s strongest on record — struck early on Sunday morning.

Omer Gambet, head of the Fisheries Cooperative Union in Al-Mukalla, the capital of Yemen’s southeastern province of Hadramout, told Arab News that the fishermen, all from Kusair village, were among dozens of Yemenis fishing for tuna in Somalian waters.

The bodies of the seven men were found close to the wreckage of their fishing vessel, he said.

Cyclone Gati lashed parts of Somalia on Sunday after wreaking havoc on Yemen’s remote island of Socotra.
At least eight people were killed and thousands left homeless as torrential rain and gale-force winds destroyed houses in the villages of Xaafuun and Hurdiya.

Local authorities in Yemen have ordered financial compensation for the families of the seven fishermen.

In Socotra, where the cyclone first made landfall on Saturday, residents told Arab News that three days of nonstop rain had triggered flash floods that damaged houses and washed away cars in and around Hadibu, the island’s capital.

“People are in desperate need of food aid,” a local government official said.

He added that Socotra has faced power and security issues since June when separatists seized control of the island.

“We do not know who will handle relief efforts as there are no functioning public bodies. There has not been any humanitarian assistance,” the official, who declined to be named, said.

In the port city of Aden, Yemen’s interim capital, government offices and local hospitals were placed on alert amid fears of flash flooding.

Torrential rain and floodwaters in August killed 20 people and left thousands homeless across the war-torn country.

In its latest bulletin, Yemen’s meteorological department on Tuesday warned fishermen against going to sea, and forecast heavy rain in the country’s western, southern and eastern areas.

Five civilians were killed and several others wounded on Tuesday when a land mine planted by Houthi rebels destroyed their vehicle in the western province of Hodeidah.

The blast occurred on the main road linking Al-Tuhayata with Khokha. Local officials believe Houthi fighters planted the mine to target government forces in the area.

Fighting has been raging for months in Hodeida as the rebels push to seize control of new territory in the province.

In the densely populated city of Taiz in southern Yemen, a mother and her two children were wounded when a rebel mortar shell struck their house on Tuesday.

Houthi militants have intensified the shelling of residential areas in Taiz in recent weeks after failing to seize the city’s downtown.