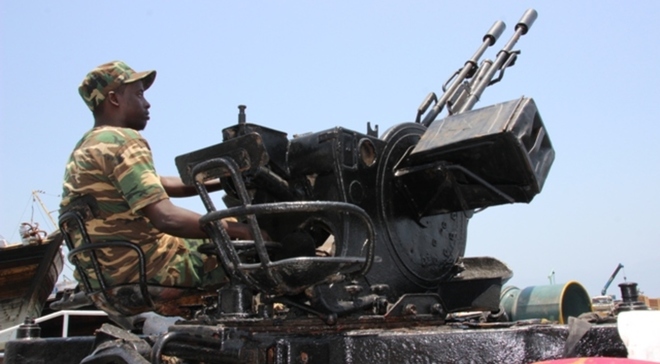 GAROWE ONLINE| Fierce clashes have continued for second day in the northeastern State of Puntland, with government troops neutralizing militants trying to infiltrate by boats in onslaught involving artillery according to residents. Garowe Online examines who is fighting whom, and how the coverage confuses the Islamic State of Iraq and the Levant (ISIL) with Al Shabaab?

In a sign for heightening military tensions, Puntland forces widened pursuit against fighters linked to Al Shabaab by launching another offensive in the village of Godobjiran on Thursday.  The fighting is raging between Puntland forces and militants in Bad-Qado area which lies 40kmaway from Godobjiran according to Puntland-based independent station, Radio Garowe crew in the area.

On Thursday morning, officials told Garowe Online that at least 30 fighters are believed to have been killed in the clashes. If confirmed, this marks heaviest loss sustained by militants estimated to be a figure between 100 and 170.

“Puntland forces have engaged in heavy gun-battle with Al Shabaab fighters in Bado Qado,” Radio Garowe journalist, Ali Abdi Du’alle reported.  A resident has also echoed that smoke plumes were rising on the horizon near Godobjiran.  Meanwhile, barrage of artillery that continued into Wednesday evening has ceased in Suuj as militants have got holed up in escarpments and pits.  “Gunfire is sporadic now and the people began fleeing homes in Suuj and Garmaal,” a source reached on phone told GO.

Speaking with GO correspondent, Puntland Army Unit Commander has denied report circulated in Mogadishu-based press: “It’s baseless propaganda that some of our fighting vehicles were destroyed in the clashes. Only three soldiers were wounded.” A delegation led by Puntland Deputy Commander-in-Chief of Police Force, Abdulkadir Farah Ereg, has reached Garacad where the surprise thrust began.

Internal schism has been reigning through beleaguered Al Shabaab group since July, 2015 when the top brass became split on whether to switch allegiance to ISIL or stay loyal to Al Qaeda.  The feud spread, forcing infamous Al Shabaab ideologue , Abdulkadir Mumin to defect with a group of confidants in October, 2015. Mumin militias clashed with pro-Al Shabaab fighters who were trying to go after the splinter group in Timirshe, some 150km south of Bossaso port city.  The Islamic State faction is based in Hul Anod, a small coastal village on a high point overlooking the Indian Ocean.  Intelligence sources believe that militants who arrived in Garmaal on March 15 might aim to fight alongside the splinter group in Hul Anod.  Al Shabaab has yet to comment on militants in boats.

“The government is committed to security, and it cooperates with Puntland and other regional states. Now, it’s a time for [Somalia Federal Government] to bolster the [security] cooperation,” Arte said during an interview with VOA Somali Service.

Odawa decried the remarks, stressing that the government’s position on Al Shabaab is known.

Puntland President Abdiweli Mohamed Ali is heading home from a visit to Canada and the US in the wake of militants arrival.

He was also confidant of win against militants without foreign troops while also calling for military assistance similar to that given to Somali National Army (SNA) and AMISOM for Puntland Defence Forces (PDFs).