Puntland demands for withdrawal of Somaliland troops from its territories 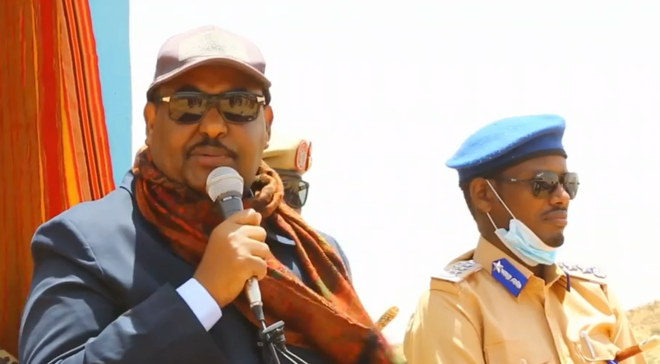 GAROWE, Puntland - Somaliland troops within some contested regions in Puntland should be withdrawn urgently or risk military action, President Said Abdullahi Deni said on Sunday, adding that his government will defend its territorial integrity "at all costs.

Hundreds of troops from secessionist Somaliland have been camping in border point regions of Sanaag and Sool, a move that has often triggered fierce clashes in northern Somalia, which have left dozens dead in recent years.

For instance, Puntland forces clashed with Somaliland troops last year, leaving dozens killed and injured. Puntland had accused the Somaliland troops of trespass, but the tensions across the common border eased after both sides opted for dialogue.

But speaking at Qardo during a pass out of hundreds of Puntland troops who had been undergoing training, Deni accused Somaliland of undermining the territorial integrity of the Somali Federal State, adding that Hargeisa should withdraw its troops immediately for the sake of peace.

Failure to implement the order, he added, Puntland will be forced to deploy its military for retaliation, a move which could further escalate tensions between the two sides, which have been at loggerheads for several years now.

"I call upon Somaliland to peacefully withdraw its troops from Puntland. This is how people coexist peacefully," he told the graduating soldiers. "Failure to do this, we shall use military force to take back the territories which they have occupied contrary to the law."

He hailed the soldiers for their commitment to the uplift the security situation in the federal state, which was founded in 1998. The soldiers, he added, "must be at all times be focused towards ensuring stability and growth in Puntland for the sake of prosperity".

The federal-state has been recently struggling with insecurity, following increased attacks from Al-Qaida linked group, the Al-Shabaab. For instance, the region lost Nugaal Governor Abdisalan Hassan Hersi in April followed by the assassination of Mudug Governor Muse Nur, with Al-Shabaab taking responsibility for both deaths.

But in recent weeks, troops have been mobilized to flush out the militants from the state. Traditionally, Puntland has enjoyed stability due to smooth successions engineered by political elites, who have often embraced dialogue in the event of disagreements.

The remarks by Deni come just a week after he vowed to dishonor the outcome of the ongoing peace talks between Somaliland and Somalia's Federal Government, which kicked off in Djibouti, following pressure from the international community and local leaders.

Speaking during the opening of the 46th session of Puntland's parliament, Deni accused Mogadishu and Hargeisa of "deliberately" sidelining the region, despite its traditional differences with Somaliland, over the contested border regions.

"As we have declared many times in the past, we will not accept any outcome from talks with Somaliland without Puntland attendance," he said, in a statement that could change the course and probably derail the peace talks.

Ismail Omar Guelleh, the Djiboutian president, and the Ethiopian PM Abiy Ahmed brokered the meeting. Already, the two sides have established a technical committee that would hold meetings in Djibouti before coming out with agreeable issues for implementation.

For over three decades, Somaliland has been running a functional parallel government after seceding from Somalia. However, efforts to have it recognized by the international community have failed, forcing the two sides to try and resolve the standoff.

Analysts believe that the talks will only bear fruits should border debacles such as the current stalemate at Sanaag are resolved. Hargeisa is yet to respond to the statement from Puntland but its keen to solve contested issues with Somalia.