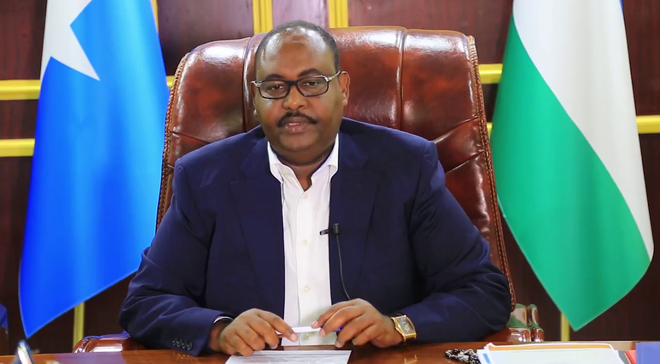 GAROWE, Puntland - The removal of Somalia Prime Minister Hassan Ali Khaire by parliament on Saturday was not only "illegal" but also "dishonest", the federal state of Puntland said on Sunday, in a statement issued by regional President Said Abdullahi Deni, who added that MP's actions were "unwarranted".

Khaire was kicked out in a vote of no-confidence which was engineered by at least 170 legislators during a chaotic session chaired by Speaker Mohamed Mursal Abdirahman, a close confidant of President Mohamed Abdullahi Farmajo. Deputy Prime Minister Mahdi Mohamed Gulaid has since taken over on caretaker basis.

But Puntland insists the removal was "unprocedural" in the manner it was carried out, arguing that the ouster will have negative implications on the stability of Somalia, besides derailing the recent outcome of Dhusamareb talks, where the Federal Goverment and member states agreed to expedite preparations for elections.

Khaire was at the epicenter of the talks between FMS and FGS, where it was agreed that a technical committee to come with an ideal electoral model and date for elections. The team is set to reconvene in Dhusamareb on August 15 where Khaire was expected to lead the FGS side.

And Deni, in a strong-worded statement on Sunday, faulted the dismissal of Khaire, who served for a total of three and half years. The removal, he added, was done in bad faith with an intention of paving way for the extension of the current administration's term, who tenure expires in November.

"What happened there was a blow to Dhusamareb conference. The president agreed that everything he did was wrong. The PM was ready for everything we expect and that is an indirect election," the Puntland leader said, in a statement that could cause rifts with the federal government.

While terming the removal illegal, Deni insisted that President Mohamed Abdullahi Farmajo planned and executed the removal without the knowledge of Khaire, who has been against term extension in the republic of Somalia. According to him, Farmajo is "dishonest" and cannot be trusted.

He said thr former Prime Minister was honest about Dhusamareb conference, something which cost him his seat. He insisted that Puntland is unhappy with the new development, adding that it's likely to destroy confidence that federal states had built in the FGS after the Dhusamareb dialogue meeting.

"The president orchestrated the removal and this is something he should be honest with. The Prime Minister was very honest about the talks and this has cost him the seat. We are very unhappy with the new development and it's likely to plunge the country into chaos," he said.

Among others, MPs accused Khaire of failing to find a roadmap for one-person-one-vote elections, which the opposition say will bring about term extensions. Further, they argued, Khaire was unable to deliver a referendum for the much anticipated new constitution in Somalia.

President Deni's sentiments seemed to rhyme with those of former Prime Minister Omar Sharmarke, who exonerated Khaire of the accusations by MP, arguing that the entire government should have taken responsibility for the current electoral quagmire in the country.

"The parliament did not adhere to standing orders in the removal of Khaire. He was not the only federal leader responsible for the quagmire. Parliament, the president and even the speaker should also take blame for the delays," he said in a statement.

Already, Khaire has been backed by the US, Somalia's international partners, and several opposition parties who termed the removal "unconstitutional". The team accused President Mohamed Abdullahi Farmajo of plot to seclude some left from government with an aim of extending his mandate.

While accepting the vote of no confidence, Khaire said the "procedure" was wrong but bowed out for the "sake of peace and stability". He thanked Farmajo and the entire government for "giving me an opportunity to serve our people with dignity and diligence".

Farmajo also accepted parliament's decision, arguing that it was the best remedy to curb persistent wrangles between parliament and the executive. According to Villa Somalia, a substantive Prime Minister will be appointed in a month's time.