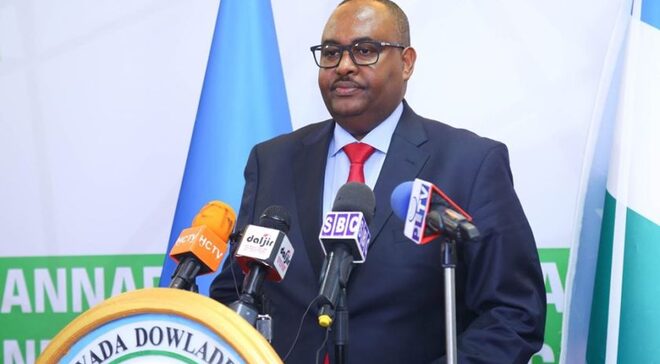 GAROWE, Puntland - The northeastern Somali Federal State of Puntland will not honour any deal reached by Somalia and Somaliland in the ongoing peace talks in Djibouti, the Federal State President Said Abdullahi Deni said on Monday, adding that the region deserved a representative in the talks.

Negotiations between Hargeisa and Mogadishu commenced in Djibouti over the weekend under the stewardship of Djibouti President Ismael Omar Guelleh and Ethiopian PM Ahmed Abiy, with both Presidents Mohamed Abdullahi Farmajo and Muse Bihi Abdi all attending

A 14-member technical committee was established and is set to conduct all meetings in Djibouti, and will be furnishing all the four leaders with the progress all the time. Guelleh is the lead negotiator, a communique released on Sunday indicated.

But in Garowe, Deni who witnessed the opening of the 46th session of parliament last Monday, insisted that his administration will boycott the outcome of federal government talks with Somaliland, arguing that the state should have been involved as a major stakeholder.

According to him, Puntland has been embroiled in border disputes with Somaliland, which has often degenerated into fierce gunfight especially in Sool and Sanaag regions. The two are along Somalia-Somaliland border.

Troops from Puntland forces and those from Somaliland have often clashed, leaving several people dead. For instance, in 2018, at least four people died after both parties opened fire, with Puntland accusing Hargeisa of encroachment.

"As we have declared many times in the past, we will not accept any outcome from talks with Somaliland without Puntland attendance", President Said Abdullahi Deni said in his speech at the opening of the 46th parliament session on Monday.

His sentiments could hamper the ongoing talks, which had a nodding from several international partners among them the US and the European Union. The technical committee comprises of seven members each from both sides.

Puntland regional government is not represented in the unitary talks, which were brokered by Washington through the help of Guelleh and Dr. Ahmed, who won the Nobel Peace Prize award last year following Ethiopia's truce with Eritrea.

In a tweet, Guelleh promised full support from Djibouti, adding that it was time the two sides solved their differences for the sake of unity. The technical committee is scheduled to address the media this week, officials said.

"As Djiboutians, we always remain hopeful that our brotherly Somali peoples will find a way forward together and we will always stand with you to help foster the best outcomes for everyone involved," said Guelleh.

Despite voting to secede from Somalia in 1991, Somaliland has never been recognized by the international community. However, the region runs a parallel administration that sits in Hargeisa under Muse Bihi Abdi.

Also, Deni called for the nullification of the electoral law, arguing that it's contrary to the country's constitution. He insisted that stakeholders should be involved in determining the electoral model which the country will use during the much-anticipated polls.

While calling for timely elections, he added, "NIEC's responsibility is not to talk or pave the way for term extension for the current govt. Its mandate is to hold one-person-one-vote polls in the country."

Already, Farmajo has agreed to host a dialogue between FGS and federal states, a move that was welcomed by the international community. However, the date is yet to be set but most parties are for this month.

"We call upon Somalia’s leaders to seize this opportunity to agree on a way forward on pressing national priorities, including elections, for the benefit of all Somali people. We acknowledge other recent efforts by the FGS and FMS representatives that helped lay the foundations for this dialogue," read a statement by the partners.

"We welcome continued efforts at dialogue, reconciliation, and compromise among political leaders. We further welcome the pursuit of solutions to political differences without violence and in a spirit of pragmatism and inclusivity, including in Jubaland."

Puntland borders Somaliland in the north but runs a government that is answerable to Mogadishu. Deni has been critical of Farmajo, who he accuses of undermining federal states, despite the fact that they're semi-autonomous.