Somalia: Al-Shabaab assassinates an official outside mosque in Puntland 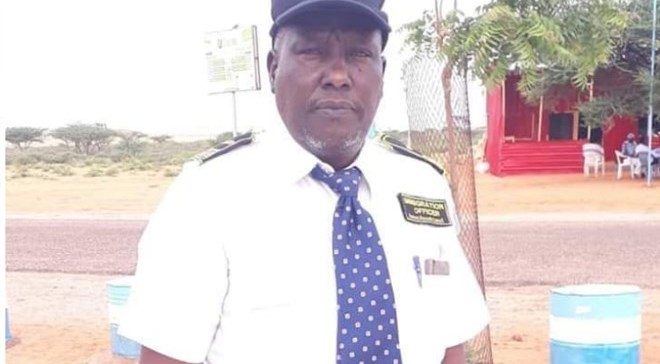 Osman Hussein Haji Farey, met his death outside a mosque in the northeastern semi-autonomous state, in an attack that could further compel authorities to go back to the drawing board on matters security.

An unknown number of gunmen ambushed the official before fleeing from the scene. The attackers were armed with pistols and shot at him, killing him instantly, witnesses said, although it was not immediately clear why he was targeted.

The officer was working at the Galkayo airstrip, which is among top income-generating sites within Puntland. Police arrived at the scene long after the militants had fled the scene, reports indicate.

"Security official said investigations are underway to arrest those involved in the killing," said Mohamed Abdalla, a senior journalist in Somalia, who added that "the scene has been secured".

In a statement issued through affiliate media, Al-Shabaab confirmed the attack saying "our fighters killed a senior immigration official in Galkayo town in a successful operation".

Further, the militants claimed that another sophisticated operation within Mudug left "several dead". The group could not, however, give proof to the alleged attack in Central Somalia.

Also, the Al-Qaida linked group said it was responsible for last week's attack at Galdadud and Bosaaso, where they targeted a convoy of Puntland Security Forces, who are credited for flushing the militants out of the state.

A fortnight ago, the militants killed Nugal Governor Abdisalam Hassan Hersi, whose vehicle drove on an IED near a police station. The raid was the first major attack within Garowe in five years, officials said.

Ras Kamboni Governor Abdullahi Diriye, who was also a critical security officer within Lower Jubba, was also killed recently along with three of his security officers in a raid that targeted KDF troops.

Puntland is one of the safest places within Somalia, a country that is embroiled in endless inter-clan conflicts and terrorism threats, with Al-Shabaab being declared "danger" to East Africa by the US State Department.

Although the group occasionally attacks the region, it was flushed along with IS-Somalia, another terror group that had temporarily established a territory within Puntland. The two groups also started fighting against each other.

Said Deni, the Puntland President, recently asked the federal government of Somalia to "embrace" dialogue as the most appropriate approach towards promoting unity and in the fight against Al-Shabaab.

The militants control large swathes of rural southern and central Somalia and have since established headquarters in Jilib town, Middle Juba. It's in the region where recruitment and training are done, officials said.

But the recent US military airstrikes have significantly degraded Al-Shabaab, forcing fighters to take refuge in urban centers. By Friday, the US had killed over 61 militants in a record 39 airstrikes since January, AFRICOM said.