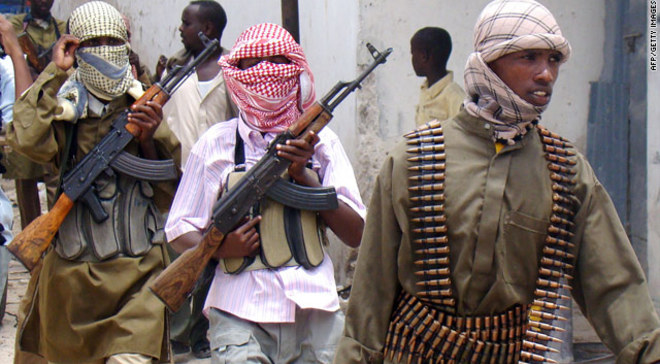 GARACAD, Somalia-GARACAD, Somalia-Dozens of Al Shabaab militants have taken control of a strategic coastal town in northeastern Somalia in an alarming twist on Monday according to residents, GaroweOnline reports.

Nearly 100 Al Shabaab gunmen on boats were spotted in the Indian Ocean town of Garacad, a source in nearby Jariban district told GO on phone.

On Sunday, an estimated 250 militants took five boats by force off Mudug regional district of Harardhere, making their way into unknown destination.

“Five boatloads of Al Shabaab fighters are said to have docked in Garacad,” the source said. Credible sources have reported that 100 of the 250, almost all armed disembarked.

The capture of Garacad has been confirmed by Mudug Governor Hassan Khalif Mohamed on Puntland-based independent station, Radio Garowe.

Mohamed added that calm prevails in the town, except for the fall of Garacad. Militants severed Golis phone networks in the area.

Analysts say, a whole boatload of militants could be heading towards difficult terrain along GolisMountain Ranges seemingly in a fresh indication for support for Deash sympathizers within thedispute-ridden group.