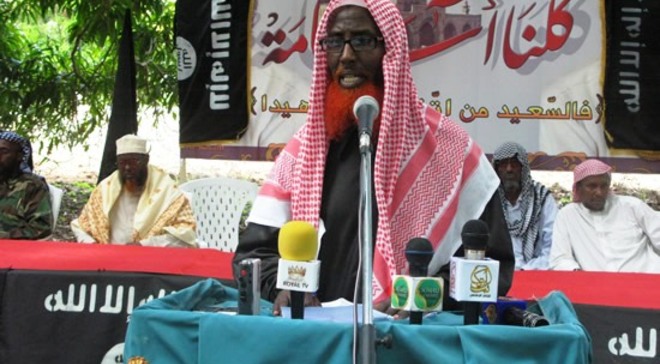 GAROWE, Somalia, October 24, 2015 (Garowe Online Exclusive)- Al Shabaab militants in the difficult terrain of Galgala and hideouts along Golis Mountain Range have in part pledged their allegiance to the Islamic State of Iraq and the Levant (ISIL) amid merger crisis within the Somali terror group, Garowe Online has learned.

Al though, it has yet to happen, the much-anticipated move now seems a ‘done deal’ with no strings attached.

After a week-long secret talks in Galgala, Abdulkadir Mumin phoned fugitive Al Shabaab officials in southern Somalia to inform them about the outcome of their ‘thorny discussions’, however his remarks have not cracked the whip within Al Shabaab ranks.

At least 30 people, including foreign jihadists are behind bars for campaigning for merger with ISIL, Al Qaeda’s main rival in the towns of Jilib and Jamame in southern Somalia.

Abu Ubaidah has made his stance towards Ayman al-Zawihiri ‘indelible’, subduing pro-ISIL voices within the group, whose grip on large chunks of territory in central and southern Somalia is more wobbling than ever.

Experts on the movement of Global Jihadists say, financial crisis could be pushing Al Shabaab northeast into ISIL arena.

Puntland Security Minister, Abdi Hirsi Ali (Qarjab) for the first time acknowledged that some Al Shabaab members have managed to receive Somali passports from Immigration and Naturalization Department headquarters in the capital, Garowe.

He said, the government is holding those who facilitated the issuing of passports for members identified as ‘ticked Al Shabaab members’.

Though, his government is not far ahead of counter-terrorism policy failures according to UN investigators, Qarjab decried the matter as something amounting to ‘embarrassment’, and could malign Puntland dignity in the eyes of international community.

The militants renewed terror operations in early 2014, and ever since have targeted government officials in pre-planned attacks, mainly in Bossaso port city.