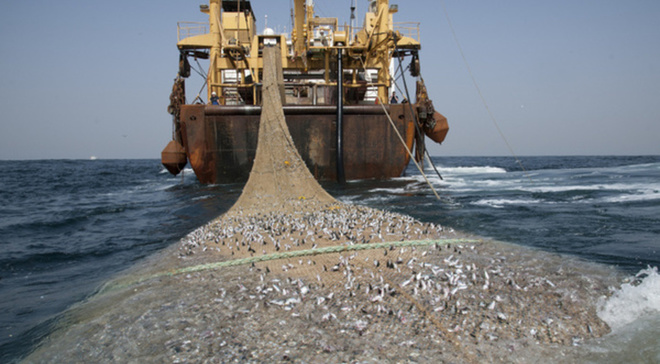 GAROWE, Puntland - A fishing boat with a permit issued by Somalia's northeastern semi-autonomous region of Puntland was seized in Thailand on suspicion of illegal fishing and with double the permissible catch, Garowe Online reports

The Thai Police announced last Thursday, February 08, 2018 that the boat bearing the name of Chotechai Navy 35 and has been intercepted in Samut Sakhon port while trying to unload a large quantity of fish from Somalia.

The officials detained the boat carrying 500,000 kilograms of fish and other marine life seized, which violates the catch limit of 270,000kg of fish that was permitted by Puntland.

Chotechai Navy 35, captained by Pawit Kerdsuwan, was among seven Thai boats spotted in March 2017 off Bosaso coast sailing under Djibouti flag. Meanwhile, the government of Djibouti has refused to take possession of the fishing vessels.

These boats equipped with drift nets prohibited in international waters for fishing have been licensed by Puntland government led by President, Abdiweli Mohamed Ali "Gaas" to carry out fishing activities off the coast of Puntland.

Speaking at a press conference in Garowe city, former Director of Puntland's anti-piracy Agency Abdirizak Mohamed Dirir “Duaysane” has revealed that this is an evidence to the exploitation of marine resources in Somalia's territorial waters using licenses given by the regional administrations, including Puntland.

Duaysane said the Federal Government of Somalia played role in the process of filing a lawsuit against the foreign trawlers to put on International trials for illegal fishing. He added that four of the boats are based in Iran, while two in Seychelles.

The ex-director displayed a letter dated March 2017 in which Somali Government banned foreign vessels from fishing in the nation's waters without its consent and warned the regional States of issuing licenses not pertinent to the fishing law.

Duaysane has accused the Ministry of Fisheries and Marine Resources of Puntland of involving in the deals with illegal trawlers and fishing vessels exploiting the State Marine Natural Resources with the consent of President Ali.

"I have been suspended last year for speaking about the inappropriate way that the government was issuing the fishing licenses," added Duaysane.

In March 2017, angry fishermen hijacked Aris 13, an oil tanker with eight Sri Lankan crew on board near the coast of Alula in the northeastern Bari province in protest of the issuance of the licenses for the illegal fishing trawlers looting the Marine resources.

The Comoros-flagged ship and its crew had been released on March 16 following negotiations between the Puntland Maritime Police Force (PMPF), local authorities, clan elders and the fishermen furious over the illegal fishing activities.

The coastal community had repeatedly complained about the dangerous activities of the illegal fishing vessels in Puntland's territorial waters and accused President Ali's administration of deregulating the fishing sector that led to extensive exploitation and endangering the marine recourses and livelihood of the people in the coastal areas.

This comes days after the leaders of Somali Federal Government and the Federal Member States have reached a milestone agreement on fishing revenue sharing, following a four-day high-level meeting in Mogadishu.

The new deal which becomes the first in the history allows the regional states to issue licenses for the foreign fishing vessels within 24 nautical miles in the country's Exclusive Economic Zone [EEZ] in the Somali territorial waters.