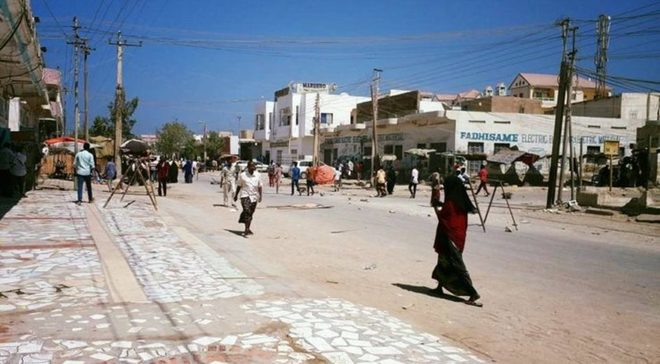 BOSASO, Puntland - A bomb went off near the main courthouse in downtown Bosaso, the commercial city of Puntland in northeastern Somalia on Saturday, wounding at least 10 people, Garowe Online reports.

Those injured in the remote-controlled landmine explosion include the chief of the court’s chairman security guards and a judge who has been admitted to a local hospital, according to the eyewitness.

A cordon has been set up around the scene and police launched a search operation following the blast that damaged structures near the court compound. No group has claimed responsibility for the attack.

The insurgents are waging a violent campaign of bombings, shootings, and assassinations in the Gulf of Aden port city to gain ground in the fight against the regional troops.

A U.S. airstrike targeting an encampment in the Golis Mountains in Puntland's Bari region killed 13 Islamic State fighters last Thursday, May 9, weeks after another strike killed the group's deputy commander.

Following his election victory last January, Puntland president Said Abdullahi Deni vowed reform in the security sector and to continue the fight against terrorists based in the mountainous areas in Bari region.

Al-Shabab was pushed out of the capital Mogadishu in 2011 but retains a strong presence in parts of southern and central Somalia and has often clashed with Islamic State.