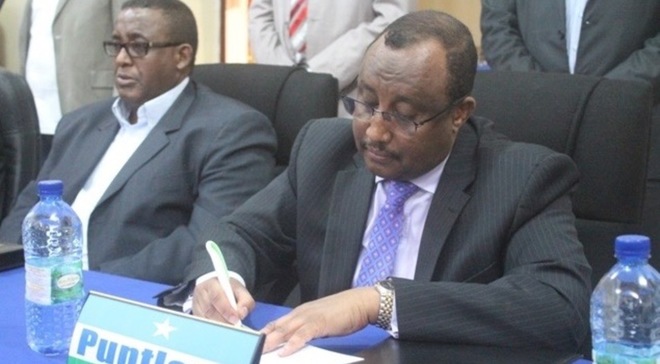 Garowe, Puntland- As Somalia is preparing for parliamentary and presidential elections due to conclude in less than six weeks, reports emerge that MPs selection process might be rigged, Garowe Online reports.

Somali Federal government has failed to deliver its promise of holding “one man, one vote” in the upcoming 2016 election, and following pressure from International community and donors to hold more transparent elections, leaders of the Federal government and regional administrations agreed to hold more inclusive and close to people elections unlike 2012.

The new roadmap involved more than 14,000 Elector College who will elect the 275 MPs-Lower House- together with members of the senate-Upper house 54 members- will then elect the president.

In 2012, 135 clan elders elected the 275 MPs who voted then for caretaker President Hasan Shaikh Mahmoud, a process widely surrounded by interference and corruption by country leaders.

In the past four years, Mahmoud tenure was overshadowed by corruption allegations reported by UN, political deadlock with Prime Ministers and sorted to appoint 3 Prime Ministers in 4 years and surviving impeachment motion by the Federal Parliament.

However, close sources tell GO that leaders from Federal government and regional states are interfering in the ongoing parliamentary selection process to cherry pick candidates in upcoming Federal Parliament for their political gain.

On Wednesday, Somalia’s Federal electoral body has warned in its released statement the challenges that electoral process is facing amid political standoff and delays by traditional elders to conclude the selection process.

Caretaker Prime Minister Sharmarke who arrived Puntland last week, is been holding talks with Puntland President and regional traditional elders to persuade them to elect MPs that will vote for him in the upcoming presidential ballot.

Presidency sources told GO that Puntland President Abdiwali Mohamed Ali has invited regional elders to the state house on Saturday, to discuss MPs selection process and campaign support for Prime Minister Sharmarke during his presence, a move which undermines the credibility and transparency of the electoral process.

In addition, the cost of candidacy for the upper house and lower house $10,000 and $5,000 respectively, has opened the opportunity for country leaders to financially support candidates to run for the seats who will vote for them in the election, according to close sources.

The reports come amid surfaced challenges hindering the electoral process and public fears of corrupting the elections similar to 2012 elections, when MPs received payment to vote for the top country leaders.

It is noteworthy that International community reiterated its support to Somalia to hold timely and fairly election, while leaders of Somali government and state leaders is attempting to rig the 2016 through corruption and unfair practices.

Since the collapse of central government in 1991, Somalis appealed for fair election which offers equal opportunities in the political process and competition.