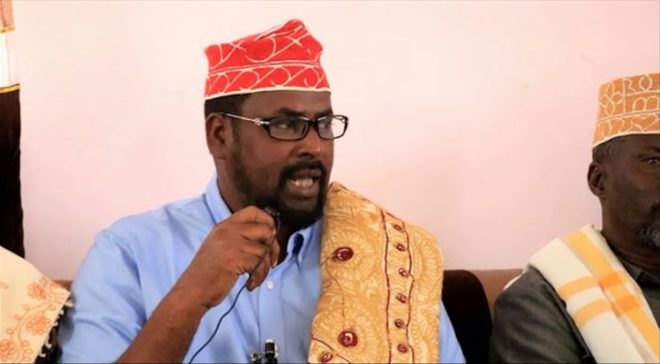 BOSASO, Puntland - Unidentified assailant has shot and killed Sultan Bashir Musa Konte in a mosque in Bosaso, the commercial and port city of Puntland on Friday noon, Garowe Online reports.

Sultan Bashir, one of the most respected traditional elders in the region was killed while awaiting the Friday prayers in Mubarak mosque in the city by a pistol-wielding man, according to the eyewitnesses.

The killer sneaked up to the elder, pretending to be someone stood for the collection of the Islamic holy books from the worshipers in the mosque ahead of Friday sermon at about 11:00 a.m. before the noon.

The killer is said to have pulled out a pistol and shot the Sultan in the head at a very close range and subsequently escaped from the scene, evading arrest after confusion and panic among the worshippers broke out in the mosque.

"The Sultan, may Allah have mercy on his soul was sitting at row near one of the mosque's entrances, reading the Quran when he was shot dead," said a witness, who spoke to GO on condition of anonymity.

Reports said the Sultan's bodyguards were unable to apprehend the killer. It’s unclear the motive behind the murder of the elder, who has been in Garowe during the election of President Said Deni last January.

Meanwhile, Puntland President, Said Abdullahi Deni was quick to denounce the shocking murder of the elder and ordered the security agencies to arrest the murderer and bring him to justice without delay.

No group has claimed the responsibility for the assassination, which was the latest a wave of terrorist attacks in Bari regional capital in the past few years, some claimed by Al-Shabaab and ISIL-linked group.

Last Month, the Islamist militant group al-Shabab has killed a Maltese national, Paul Anthony Formosa who was Bosaso port manager for the Dubai-owned P&O Ports inside the city's seaport.

The region has witnessed the deadliest attacks in years, highlighting the dual challenges facing state security from Al-Shabaab and the growing presence of fighters linked to the Islamic State of Iraq and the Levant (ISIL).