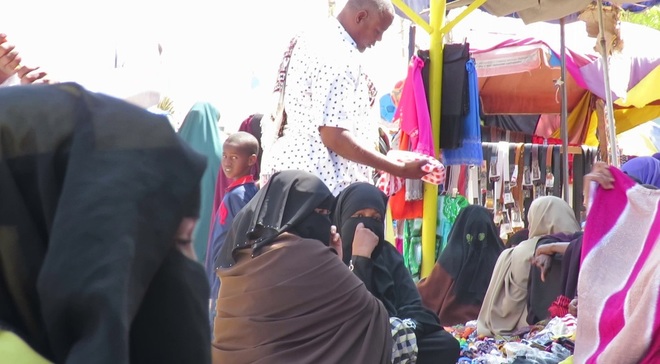 BOSASO, Puntland - A militant faction loyal to Islamic State of Iraq and Levant (ISIL) in Somalia has imposed heavy taxes on local businesses in Bosaso, the commercial hub of the northeastern Federal State of Puntland, Garowe Online reports.

Garowe Online has learned that the extremist group which has bases and footprint spreading in the region began an attempt to collect money from the firms operating in the port city, in a bid to acquire revenue for its insurgency.

The ISIL-affiliated Islamist militants stepped up intimidations and killings against traders who turned a blind eye to their demand while threatening to cripple the operations of the business companies in the entire Bari province.

"The traders and businesses in Bosaso city continue to work in fear after being asked huge sums of money by Islamic State branch in the region," a local merchant, who asked not to be named, told GO by phone.

Al-Qaeda-allied Al-Shabaab extremist operating in Galgala mountains are not currently part of the ISIL forceful practice of obtaining the extorting money from the businesses in Bosaso through threats and intimidations.

"Al-Shabaab has been and is collecting taxes in the past without killing anyone or threatening. This is a new problem initiated by the Islamic State-linked group in the region," said another anonymous trader in Bosaso.

On August 7, the deputy manager of Golis, the largest telecommunications operator in the Puntland, Abdullahi Ali Omar has been shot dead after gunmen sprayed him with bullets as he walked out of a mosque in Bosaso city.

Garowe Online could not independently verify if the assassination is linked to the ISIL's campaign, but, sources said the group switched off Golis telecommunication mast in the coastal town of Qandala, about 75Km east of Bosaso days before Omar's killing.

The ISIL fighters receive monthly revenue estimated $72,000 as a extorting taxation from the businesses and wealthy people in the city, according to reliable sources within Puntland security agencies.

This came after the public lost confidence in the state security forces to defend them from the terrorist organizations, leading the business centres and merchants to pay the taxes for the ISIL and Al-Shabaab for survival.

"At the moment, there is no functioning intelligence service in Puntland, so I believed that the government lacks the ability to protect its people and avert the frequent killings," said a former state Intelligence officer.

The official who spoke to GO on condition of anonymity said the terrorist groups established networks to facilitate their operations in the regions since the incumbent president, Abdiweli Mohamed Ali Gaas took office in 2014.

The increase in strength of the Islamic State spin-off group has attracted attention because some security officials fear it could offer a safe haven for Islamic State militants fleeing military defeat in Syria or Iraq.

The Islamic State faction was founded by Sheikh Abdulkadir Mumin, a former al-Shabaab commander in 2015 after his defection. In October 2016, ISIL briefly seized Qandala before they were driven out by Puntland forces months later.

The group is largely based in the Golis and Bari mountains of northern Somalia. In May, It responsibility for a suicide attack at a police checkpoint in Bosaso that left 5 people dead, in an attempt to vie with al-Shabaab for recognition.