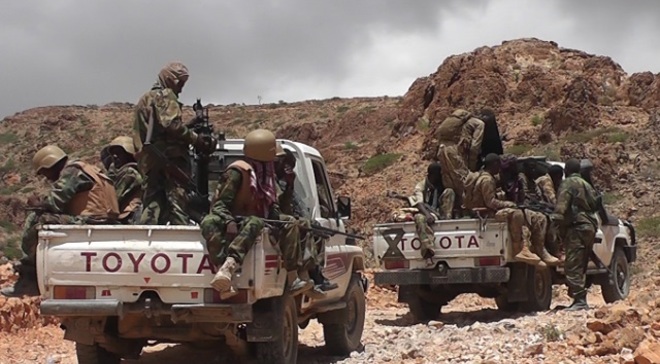 A military official confirmed to GO that an army convoy belonging to Puntland state forces was targeted in the blast planted by the roadside as the convoy was moving from Galgala towards Bosaso city.

The incident took place at Sugure area just outside Galgala, a hotbed of terror, about 40km southwest of Bosaso. The wounded have been admitted to a hospital in the port city.

Al-Shabaab, the Al Qaeda-linked terror group has claimed responsibility for Tuesday's blast, through a statement aired by its affiliated media outlet, Radio Andalus.

Puntland government hasn’t released any statement in regard to the attack against security forces or the causalities behind the Improvised explosive device [IED] explosion.

Galgala mountains near Bosaso, Puntland's commercial city was a stronghold area for the militant group Al-Shabaab since 2010, and have been the scene of landmine attacks over the past few months.

Puntland forces have military bases near the area and have been fighting for many years to dislodge the militants from their hideouts in the mountains.

Puntland, located northeastern of Somalia, has been relatively stable compared to the rest of the country but attacks by the terrorist groups, including ISIL-linked extremists are posing serious risks to the stability of the region.