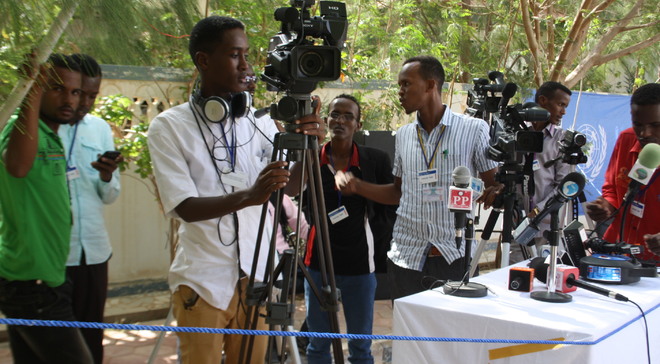 “We returned from Khaatumo conference in Saah Dheer. Somaliland military forces blocked us from travelling and began to threaten us by disembarking me and my colleagues from the car. They opened our bags, seized three camera kits, three laptops, microphones and external storages including hard disks,” said journalist Abdikarim Olol.

“We have contacted Sool regional administration but they told us they were not notified of whereabouts of equipments and who was really holding them in hand,” added Abdikarim Olol. “So far, local reports confirm that media equipments were transported to Hargeisa”

Abdikarim Olol unveiled that Somaliland government is planning to shut down several media houses and offices.

Media Association of Puntland (MAP) Secretary General Fadumo Mohamed Mohamud has called the move by Somaliland authorities a serious violation and urged the government to immediately hand over confiscated camera kits and other equipments to the four reporters and respect the freedom of independent media.

“It is really disappointing. We condemn that incident and call on Somaliland authorities to halt threats, arbitrary arrests, harsh treatment and confiscation of media equipments,” noted Mohamud.”Local administration should unconditionally return confiscated equipments to reporters”