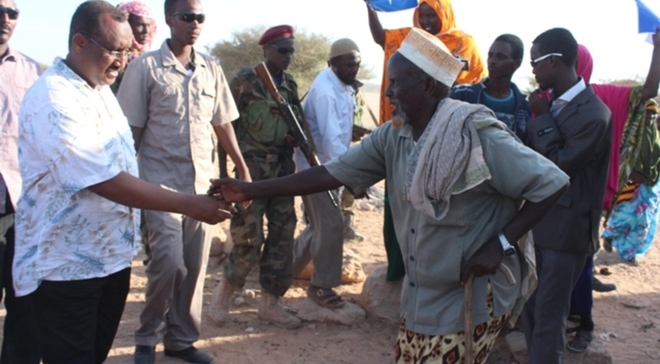 On December, joint military forces have recaptured Qandala district-located 75 km west of Bossaso city- from ISIS affiliated faction in Puntland, after it fell under the control of the militant group for nearly two months since October.

However, the delegate was reported to be received by clan elders, district officials and members of the community.

According to close sources, the visit aimed to assess the security situation in the liberated areas and hold talks with community leaders to ensure collaboration between the community and security forces to repulse any attempts of militant groups to recapture the town.

The delegate is also expected to visit other coastal towns in eastern region to closely assess the drought situation in remote areas.

Recently, about 10,000 nomadic families were reported to have migrated to Bandar Bayla district in Karkar region, in search for water and pasture after persistent droughts in large parts of Somalia.

Since it declared a state of drought in last year, Puntland government failed to woo support from international organizations operating in Puntland to provide immediate emergency response to thousands affected families.

On the other hands, officials from Banadr Bayla district have accused government ministries of incompetence to assist the communities and avert the worsening situation.

It’s noteworthy that Ali has previously visited remote vicinities in Puntland region and made countless pledges to provide assistance and development that communities aspire for but failed to honor those promises for the past 3 years.