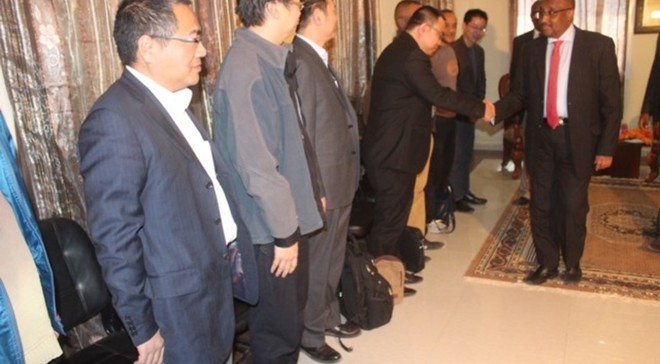 GAROWE, Puntland- The President of Somalia's northeastern region of Puntland, Abdiwali Mohamed Ali “Gaas”, who is in a visit to Hangzhou city in China, was reported to have signed agreements with a Chinese company to conduct oil explorations and Fishing in Puntland region, Garowe Online reports.

The company called China Civil Engineering and Construction Company (CCECC), and has constructed Bossaso Airport, a project which was funded by the government of Italy. The Chinese-based company CCECC, implemented various projects in Africa and has international offices in Ethiopia and Djibouti.

According to close sources, CCECC was awarded licenses to carry out exploration for Oil and Gas in two blocks in Puntland region but in return CCECC will construct Galkayo Airport. The agreements also included awarding fishing license to CCECC- affiliated company in coastal territories in Puntland for a fee of $ 10 Million.

During his trip to China, President Ali was accompanied by State Minister of Fishery and other Puntland cabinet officials, added the source.

In previous UN reports, Ali’s government was accused of issuing illegal fishing licenses to vessels and illegal trawlers that exploited the fish stocks on a massive scale that affected coastal communities in Puntland region.

During the past 3 years, Ali made many foreign trips, particularly to Gulf countries, where he signed various investment and development projects with companies and businessmen but so far not a single project has been implemented.

Among those deals was the expansion project of Bossaso seaport that was signed with a Palestinian businessman in May 2015 and another (MOU) agreement with a Known Saudi Businessman to do development projects in Mudug region.

The expansion project of Bossaso seaport was reported to include undisclosed advance payment to Puntland government to develop and manage Bossaso port for a period of 25 years.

However, this contract denied President Ali of making another agreement with DP World, that previously expressed interest to manage the port but later secured a deal to develop and manage Barbera port.

Recent reports have shed light on a lingering dispute between officials of the Puntland Petroleum and Minerals Agency (PPMA), whereas the government was reluctant to intervene.

The dispute surfaced as Puntland President opted not to consult PPMA Director Isse Dolawaa on the issues that concern the agency and his absence from the official delegation that is visiting China.

In a recent inquiry by Horseed Media into the matter, it has asked Isse Dolawaa for the reasons behind President Ali’s trip to China, and he stated that he is not aware of the purpose of the trip.

According to close sources, PPMA Deputy Director, Abdi Aziz Haji Sayn, who share close clan association with President Ali, is reported to be the current official in charge of the activities of the agency and communications between Puntland government and the Chinese company.

Sayn lacks the experience and criterion to manage such state Agency and agreements. GO has learnt that Sayn is attempting to award shady contracts to international companies to explore natural resources mainly minerals in Puntland region.

After his election, Puntland President was slammed for appointing young, inexperienced and incompetent staff to government posts, mostly those who they share sub-clan association or use to work with him during his past tenure then as Prime Minister in Mogadishu

Those officials was accused of hindering various government agencies’ operations that used to serve Puntland people, as President Ali appointed them in new posts that overlaps with the role and mandates of government ministries.