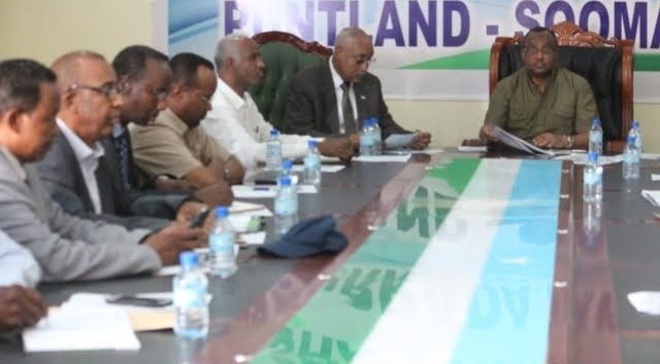 Security Minister Abdi Hirsi Ali Qarjab has briefed cabinet gathering on latest security developments including recent deadly infighting between Al Shabaab and the so called Islamic State of Iraq and the Levant (ISIL) in areas near Bari regional district of Iskushuban.

Garowe Online has learned that Mumin retreated to ex-Pirate enclave ‘Hul-Anod’ and has more recently begun luring recruits into ISIL via handsome financial pledges. Hul-Anod is a high point overlooking the Indian Ocean according to GO analysts.

Defection from Al Shabaab militants dealt severe blow to Mumin who had since been in charge of treasury in Galgala Mountains.

A press statement released on Thursday afternoon was more or less of every prevailing matter but fresh threats posed by terrorists’ infighting.

Al Shabaab militants are still looking to Mumin’s movement in vicinities around Timirshe and Balidhidin villages, sources have said on condition of anonymity because of the security sensitivity of the issue in phone calls as of Thursday.

The government has not commented on clashes that ensued between the two factions as residents voice concerns over, whether now precarious frontlines may be turning into battlegrounds.