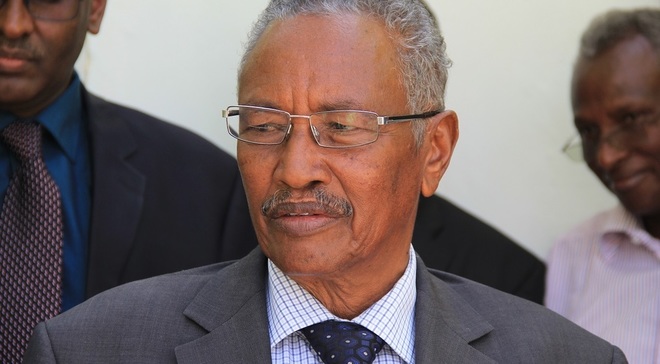 “I maintain my position on 4.5 electoral transition; I have articulated how this model doesn’t suit Somalia today to the Prime Minister,” explained Farole.

Continuing, he noted: “I Saturday met with the Prime Minister, it was followed by another discussion with Puntland President Dr. Abdiweli yesterday. The motive behind [Prime Minister’s] trip is clear. It is about scraping the wider public opinion and the government decision. He came for this reason, and nobody represented international community [in talks].”

Moreover, Farole said that he anew told the Prime Minister that Puntland is still sticking to its disdain for the obsolete quota.

Puntland remains wary of the election model introduced by UN-backed national government, and endorsed by members of International Community.

“I don’t think of anything else, but for Hassan Sheikh Mohamud to cement his grip on power in upcoming election,” seethed Farole.

In February, a group of diplomats led by new United Nations envoy to Somalia, Ambassador Michael Keating, arrived in Puntland to listen to the views of government, politicians and civil society.

Upon the completion of the visit, the diplomats noted that they shared concerns that the model is imperfect and least path of options that doesn’t represent Somalia honoring commitment it made to itself.

Prime Minister Sharmarke’s delegation is trying to persuade Puntland to agree to the model due to mounting international pressure.

27.01.2016 Somalia’s Federal Government presented an electoral proposal noted with both enthusiasm and concerns among regional Member States and the key political actors. Under the new model, Lower House will based on traditional 4.5 power sharing formula, and 54-member Upper House would have 48 representatives to be divided equally among Six Federal Member States while Puntland and Somaliland will enjoy additional three seats each given their political maturity and size in regions compared to existing and prospective administrations.

28.01.2016 Puntland President Abdiweli Mohamed Ali swiftly objected to the election model, saying, the proposal doesn’t serve the interests and wider public opinion in the northeastern State. Ali insisted that he will put the final decision back in the hands of Puntland people during a news conference at the heavily fortified Villa Somalia presidential compound.

30.01.2016 Somaliland Interior Minister Ali Mohamed Waran Adde poured cold water on any representation in Mogadishu talks, once more reiterating that Somaliland declared its independence from the rest of the country in 1991.

08.02.2016 Traditional leaders shared the same views as Puntland government, rallying around the government in its objection to the unilaterally adopted model.

09.02.2016 New United Nations envoy to Somalia Ambassador Michael Keating arrived in Garowe on first visit since being appointed to the post. His delegation sought to get understanding of how political and community leaders feel about 4.5 quota, and conferred with people across various spectrums on new electoral proposal.

10.02.2016 Accompanied by former Vice President Abdisamad Ali Shire and his cabinet members, Abdirahman Mohamed Farole sat down with foreign diplomats covering Somalia at Puntland Development Research Center (PDRC). Farole told visiting delegation that 4.5 is something of the past, obsolete and dysfunctional model that dodges rights of people.

“The Puntland people and its current leadership are within their legal and constitutional rights in rejecting the unilateral election blueprint proposed by the Federal Government of Somalia (FGS) under President Hassan Sheikh Mohamud for the upcoming federal election,” said former Puntland President.

“This may not give Puntland any other option but to stay out from this process. Things went too far, Somalia has yet to reconcile,” Farole concluded.

Similarly, civil society groups said in a written statement to international community that they are cool to return to 4.5 formula.

11.02.2016 During a joint news conference with Keating, President Ali said there’s no agreement on the exact model Somalia should adopt for 2016 elections.

“Our stance reflects on the wider public opinion in Puntland, they came to see what the will of our people is, they met with different segments of society including civil society groups, traditional leaders, parliamentarians, politicians and the government,” he said.

Meanwhile, Keating unveiled: “We shared concerns that this model is imperfect, that it doesn’t represent Somalia honoring the commitment it made to itself. International community also wants to support many years ago that Somalia would move away from 4.5, we recognize that and we believe that it still may be the least path of options before us”.

New UN envoy stressed that fair and transparent elections do offer a way out of 4.5, and called for decisive actions and that trust be built if Somalia is to move forward.