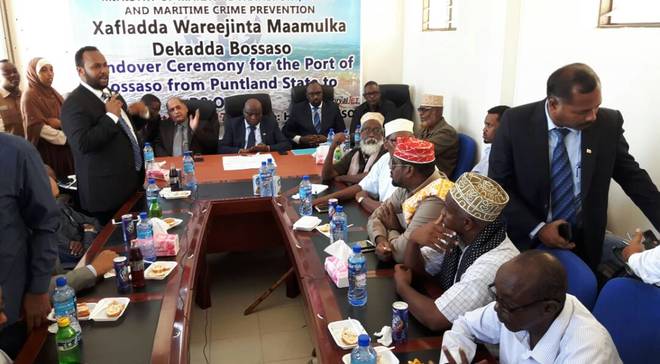 BOSASO, Puntland - A handover ceremony for the port of Bossaso was held in the commercial city of Somalia's northeastern semi-autonomous region of Puntland on Thursday, Garowe Online reports.

OReports reaching GO's news desk indicate that senior Puntland government officials have attended the event to transfer the management of the seaport on the Gulf of Aden to Dubai-based P&O Ports.

The city's overall security has been extremely tightened by the state forces who were deployed on the main streets during the handover event in the port, as its operations were up and running.

Elders, intellectuals and people from civil society groups were in attendance.

P&O Ports has won a 30-year concession for the management and development of the port after signing a deal worth $336 million with Puntland President, Abdiweli Mohamed Ali "Gaas" in Dubai in April 2017.

The handover comes as the local traders are complaining about sand filling up the shoreline, which is blocking the big container ships access to the narrow lanes of the port.

President Ali said early that Infrastructure development is a golden opportunity for the government of Puntland and its people, as it underpins the efforts of taking the Somali semi-autonomous state forward.

The concession agreement of expanding the Bosaso port involves building a 450m quay and a 5 hectare back up area, dredging to a depth of 12m with reclamation work using dredge spoil.

According to Abdirahman Abdishkur Warsame, the teams agreed to jointly work on security and to hold inclusive and peaceful elections.