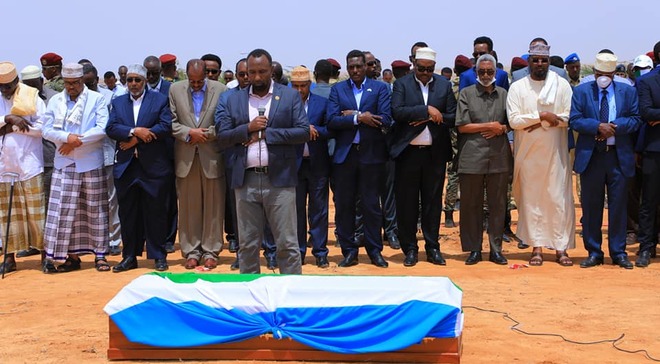 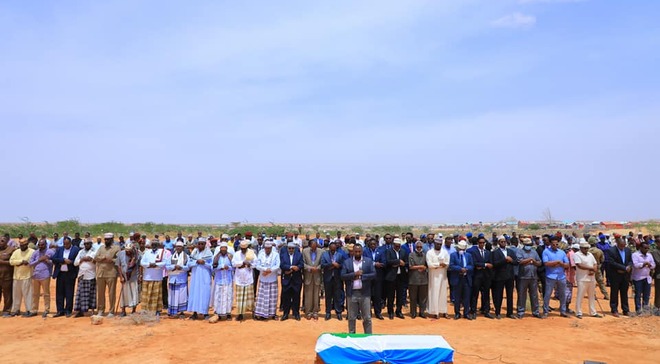 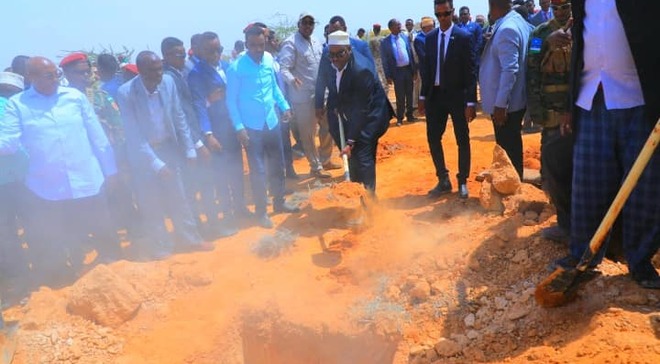 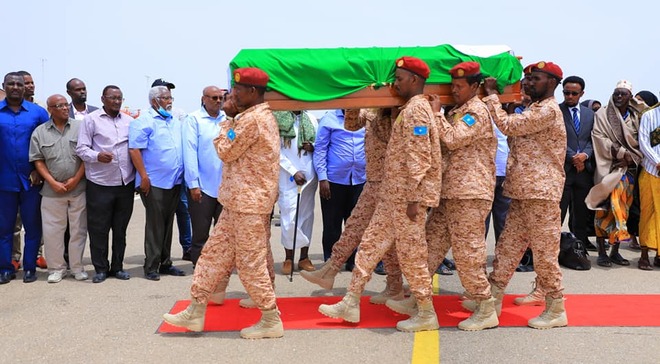 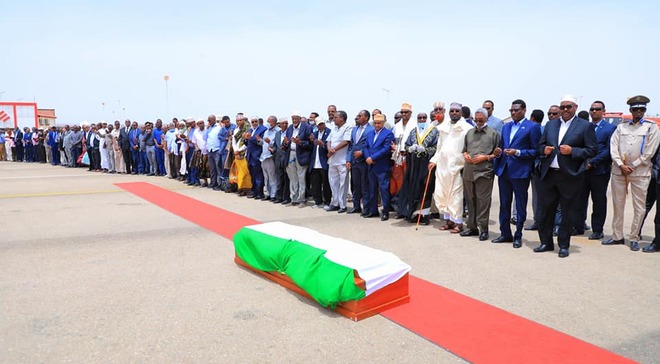 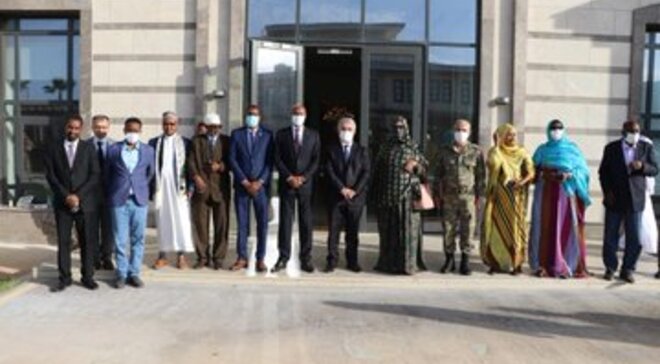 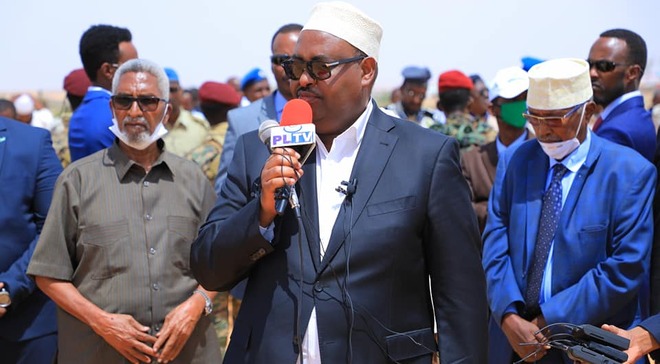 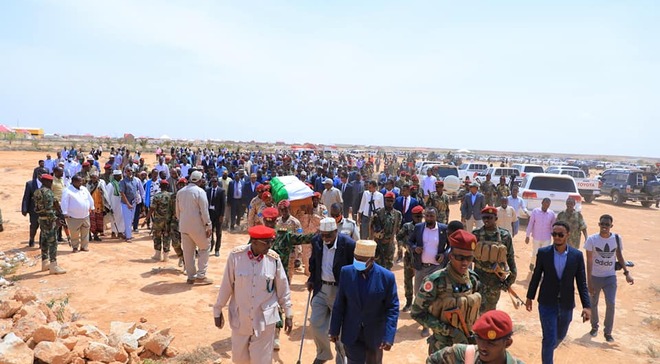 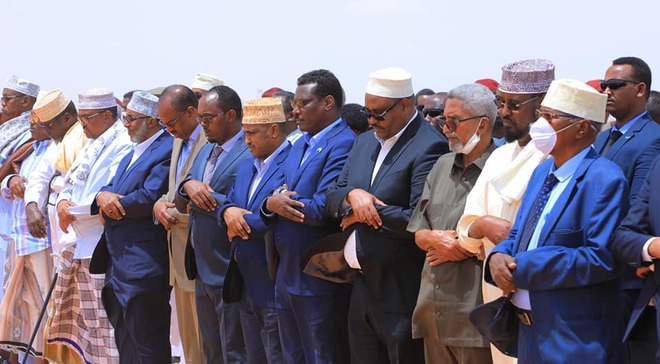 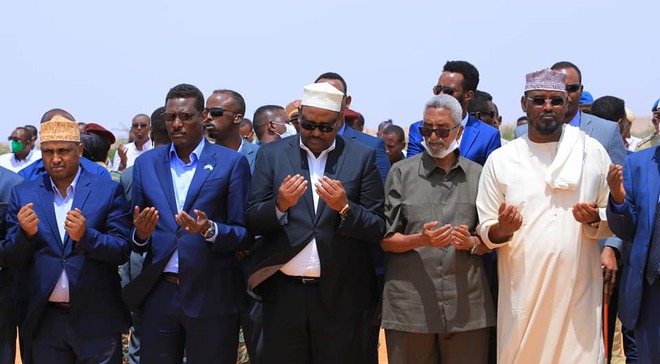 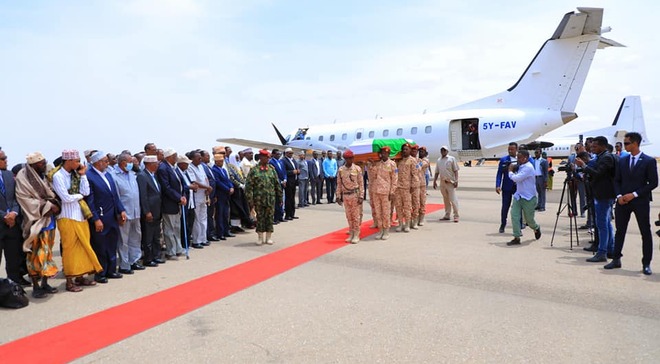 GAROWE, Puntland - The federal state of Puntland held a state funeral for one of its founding fathers Mohamed Abdi Hashi, who died over the weekend in Nairobi, with the function bringing together senior leadership from across Somalia on Wednesday in Garowe.

Hashi's casket was wrapped in Puntland's flag and senior military officials carried it on their shoulders along a red carpet as thousands of mourners watched from the sidelines, before the regional anthem was played, as his supporters seemingly empathized with his family.

The regional force saluted to the fallen former president through their traditional military-style which included forming a guard of honour which was inspected by the top leadership in Somalia. The function was graced by regional President Said Abdullahi Deni, who led the residents in paying their last respects.

Earlier in the morning, regional leaders among them Ahmed Kariye alias Qoor Qoor of Galmadug and Ahmed Islam Mohamed Madobe of Jubaland had arrived in Garowe from Dhusamareb where the regional leaders had been meeting over the pre-election standoff in Somalia.

There were claims that Somalia's Prime Minister Hassan Ali Khaire was to attend the funeral since he had been in Dhusamareb, but he didn't travel to Garowe. Firebrand Senate Speaker Abdi Hashi Abdullahi attended the function, which was also graced by several former leaders.

Mohamed Abdi Hashi, who also served as Vice President in the region, died in Nairobi after a battle with a disease, Puntland President Said Abdullahi Deni confirmed on Sunday in a press statement dispatched to media houses.

He was elected as the president of the region in 2004 when Somalia was entering into a new Transitional Government. He replaced Abdullahi Yusuf Ahmed, who became the president of Somalia from 2004-07 in a setup crafted by the African Union.

Deni said: "I extend my condolences and those of Puntland people for the loss of founding fathers Mohamed Abdi Hashi. He served the people with dedication, integrity, and adorable character. We wish his family God's comfort during this difficult time."

Since it's formation in 1998, Puntland remains one of the most stable regional states in Somalia. Al-Shabaab militants who have been wreaking havoc across the country have often found it difficult to invade territories of Puntland, which has a formidable security force.

His death comes at the time Somalia is struggling to find a common ground on the model and date for elections that are supposed to be held this year. Both federal states and the opposition accuse the federal government of plotting for term extensions.

On Sunday, federal states issued a communique after three days meeting in Galmadug where they insisted that the leadership should reach a compromise on the model to be used. They ruled out universal suffrage polls citing time constraints as the major hindrance.

The country is at a critical stage and the international community has been pushing for an "honest" dialogue. Some reports indicated that President Mohamed Abdullahi Farmajo is set to join the regional leaders in Dhusamareb for negotiations, but Villa Somalia is yet to confirm his trip.