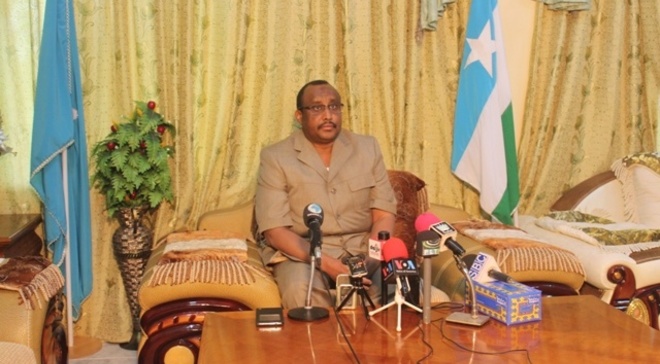 As Al Shabaab militants intensified their drive against Puntland defence forces in the difficult terrain of Galgala-some 50km south of Bossaso-security forces beefed up their presence along the main roads leading to the key structures.

Ali said, during his seven-day stay in the port city, he will assess the security situation and social services infrastructure development including upgrade of Bossaso airport runway.

On the political impasse between Federal Government of Somalia’s leadership, Puntland President called for immediate solutions and mutual concessions at this difficult time: “Puntland has already taken a stand on the dispute according to the last press statement, the no confidence motion against the government must be reconsidered and both sides engage in more vehement talks because the tasks ahead for [the government] are many ”.

Continuing, he revealed that a reconciliation conference may kick off by January 2015, and once again reiterated that the disputed regions of Sool and Sanaag matter to Puntland government.

“The missing areas [Sool region towns] are part of Puntland, It is our responsibility to restore them back,” added Puntland president.

As part of his provisional tour, Ali Wednesday made a stopover in Qardo, holding talks with traditional and community leaders.