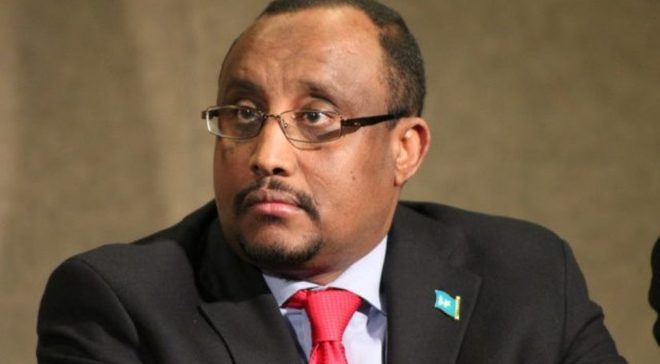 GAROWE, Puntland - The outgoing President of Somalia's northeastern Puntland state, Abdiweli Mohamed Ali "Gaas" was accused of attempting to ignite a domestic dispute among the clans in the state, Garowe Online reports.

Garowe Online learned that President Ali is working on ways to influence the electoral process of the regional state's next parliament with an aim to lure local clans pick his favorite lawmakers as he mulls run for re-election in 2019 polls.

The clan dispute over the selection of their representatives in the upcoming state assembly has been on the rise and some candidates seeking seats in the legislative branch already began celebrating victory on the social media sites.

The president whose five-year tenure expires in January is said to be sending individuals to the constituencies in a bid to block clans from electing the MPs they want to have in the parliament and then create a row that eventually ends up in Dispute Resolution Committee.

The impending committee is being "formally appointed" by the president in an effective consultation with the presidential candidates running for presidency and people from all walks of life, according to the constitution.

"Puntland's candidates appear to be to not to be paying particular importance to the appointing the committee as the president plans for election manipulation," said a person who is familiar with the Puntland election, who spoke to GO.

Additionally, officials working at the office of the President were sent to their respective constituency for an attempt pressure the elders of their tribes to give them green light paving the way for becoming members of the parliament.

Ali who has not so far announced that he would seek a second term in office in 2019 is now calculating and measuring public support on his re-election and the number of the parliamentarians he can put in the next assembly.

The much-awaited Presidential Election of Puntland is scheduled to be held at the beginning of next year, especially on 8th January 2019, with a number of candidates, former ministers and army chief are vying for the top seat.

Ali's administration, including his incompetent cabinet, has faced many scandals and corruption allegations leading to continuous failures in the security and state-building during the past five years.