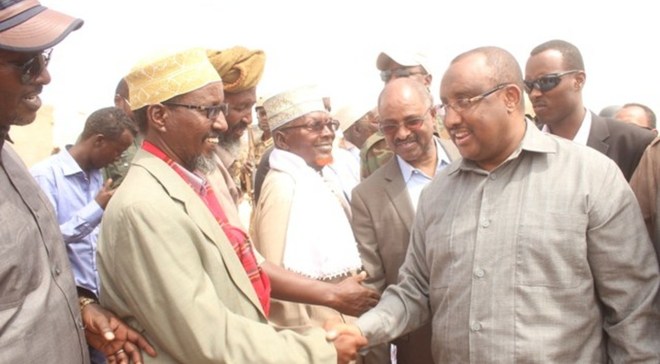 BOSASSO, Puntland- A delegate led by the President of Somalia’s semi-autonomous region of Puntland, Abdiwali Mohamed Ali Gas, have arrived Armo district in Bari region on Thursday, where they were welcomed by traditional elders, district officials and large members of the community, Garowe Online reports.

During his visit, President Ali is set to hold meetings with clan leaders intended to end lingering political dispute with regional clans and to broker a peace deal with rebel leader and former Bari Governor Abdisamad Mohamed Galan, whose militias have fought Puntland forces in several areas in Bari region.

Locked in months-long dispute with Puntland President, clan leaders are seeking for more power sharing in Bari region and Puntland cabinet, whereas President Ali is counting on elders support to unify Galan’s militias under his government forces.

Close sources told GO that President Ali, is planning to deploy the uniformed soldiers as reinforcement to forces positioned in Galkayo town, who been fighting Galmudug forces in the past 3 weeks.

On the other hand, President Ali has visited the construction site of the road project that will connect El Dahir to Eragbo town in Sanag region, a project cost that was covered mainly by the public and partially by the students.

However, the talks is expected to be wrapped up on Friday, as the President is headed to Garowe city to officially kick start the 38th session of Puntland Parliament on Saturday, which was postponed due to his recent trip to Bossaso city on last week.