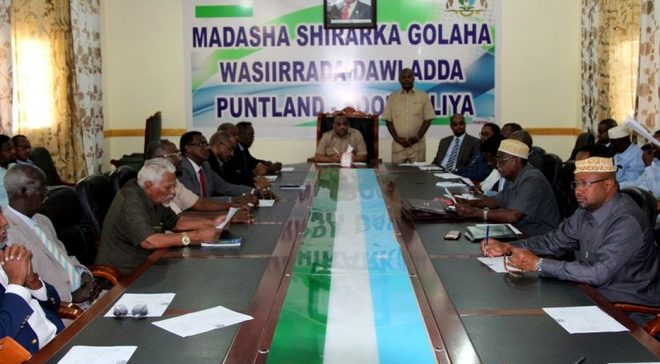 GAROWE, Puntland - Puntland cabinet has held an emergency session on Saturday at the state-house over the situation in Sool region and the latest clashes in the town of Tukaraq, Garowe Online reports.

At the end of the extraordinary meeting, the cabinet has announced that Puntland is preparing for war with the breakaway Somaliland and urged the public to take part in the liberation of the occupied territory.

The decision came as the two the states are moving closer to open warfare in the disputed Tukaraq, where the troops of both sides have engaged in a heavy gunfight on 15th May which left dozens dead.

President Abdiweli Mohamed Ali "Gaas" who chaired today's cabinet meeting has accused Somaliland of launching an aggressive incursion on Puntland and threatened to wage "long-running war" in the region.

Somali government, UN and U.S. called for an instant ceasefire in Tukaraq, urging Puntland and Somaliland to exercise utmost restraint to avoid further bloodshed and opt for dialogue to resolve their dispute.

The two states fought sporadic battles since 2002 over the ownership of the disputed Sool and Sanaag regions in northern Somalia.

Tension has been simmering since last January after Somaliland troops captured Tukaraq from Puntland forces following an offensive which came as Somali president was on a week-long visit to the region.

Since then, the two sides were amassing troops and battle-wagons mounted in artillery weapons in Tukaraq and its environs, a move that has led to flaring up a full-blown fighting between the rival forces.

Somaliland declared unilateral independence from the rest of Somalia in 1991, but, the separatist regime has not yet gained an international recognition as a sovereign state.