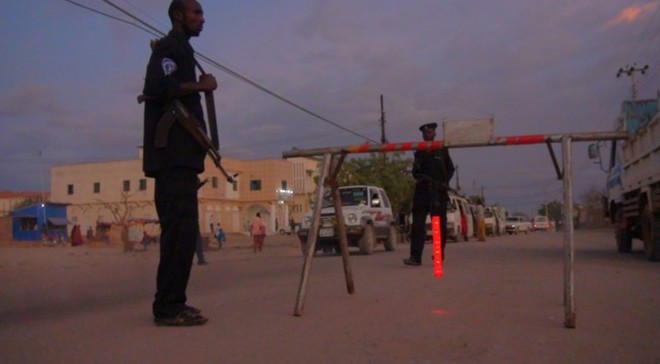 A Prominent elder in Harfo district, Hasan Moalin Dahir, spoke to Radio Garowe (RG) and said that protests had erupted after Police forces from Galkayo have arrived to Harfo district and laid blockade in the road.

“It became frequent incident that soldiers stage mutiny during the term of the current administration led by President Abdiwali Mohamed Ali “Gaas”, its unfortunate to see such recurring incidents,” added Dahir.

The elder blamed Puntland government for failing to fulfill its responsibility towards the security forces, and warned it could lead to security crisis in the region if it not dealt appropriately.

Dahir confirmed to RG that mutinous soldiers are refusing to the vehicles to pass Harfo village, trapping private and commercial vehicles to travel between Garowe and Galkayo cities.

He also lamented at the situation that is causing burden on people and businesses in the region. So far there are no efforts by Puntland government to end the crisis in Harfo district, however, elders in the village are holding talks with the soldiers to lift the blockade.

The soldiers who seized also the custom office of Ministry of Finance, are demanding payment of delayed salaries and bonuses over the past months.

This is not the first time that security forces have seized control of the village for couple of days before withdrawing from it following talks with government officials to end the crisis.

on the other hand, unconfirmed sources revealed that the Police commissioner of Mudug region has reached Harfo village to hold talks with the soldiers but returned back to Galkayo after failure to convince the solders to end the seize.

According to Abdirahman Abdishkur Warsame, the teams agreed to jointly work on security and to hold inclusive and peaceful elections.