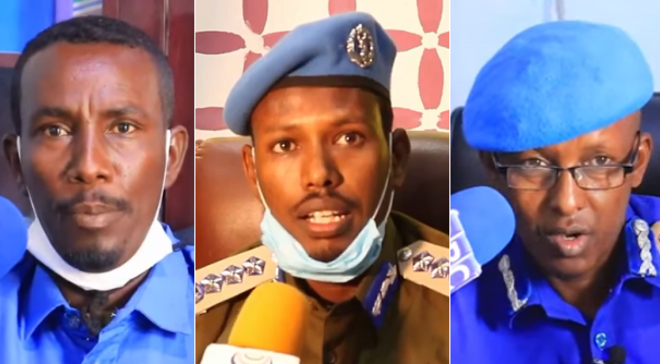 GAROWE, Puntland - Authorities in Puntland have suspended two top police officers following the emergence of a video clip which showed two women being tortured, official reports indicate, in yet another move that could shape the relationship between men in uniform and civilians.

Deputy Commander of Karkaar regional police Osman Ahmed Dhalac and Omar Hiirad Kaatun, who is the commander of Qardho Central Police, were suspended after the clip taken on June 8 directly implicated them of torturing their victims.

The video was leaked to social media platforms sparking condemnation from different quarters, leading to the suspension of the two. The two are the most senior police officers to be caught on the wrong side of the law in recent months.

According to General Abdi Hassan Hussein, who was recently promoted to head Puntland police, the two officers detained young women who were taking a walk in the outskirts of Qardho town, but it's not clear who took the video of the incident.

In the video, the two suspects are seen beating the women for "worshipping fire", inflicting serious injuries on the body in that process. The two ladies were detained for several hours by their tormentors, the police boss added.

Gen. Hussein apologized to the public over the incident, adding that the sole role of the police is to ensure law and order, but they are supposed to strictly respect the rule of law while executing their responsibilities.

"It's a regrettable incident and they must now face a probe. They remain suspended until investigations are done by an independent team to establish the real motive behind the torture," said the police commander while condemning the incident.

He continued: "On behalf of the police, I apologize for that unprecedented incident. It should not happen anywhere in this world, it's quite unprofessional to inflict pain on the people you're supposed to protect."

Puntland is one of the Federal states in Somalia where the rule of law is highly appreciated and police officers are recruited based on merit and qualifications before undergoing rigorous training upon recruitment.

It's rare for such incidents to happen, a move which again could probably trigger the removal of the officers from the service as an example to the rest who may be caught in a similar quagmire in future according to analysts.

The incident comes in the middle of the spontaneous protests across the United States of America and around the world, following the emergence of a video in which a police officer was captured on an amateur video kneeling on a black man.

The man, George Floyd, would later die after struggling to breathe. Authorities in Minneapolis dismissed Derek Chauvin, the officer who was captured in the viral video and is now set to face murder charges in court.

Cases of police brutality are common around the world, with neighboring Kenya also being ranked among the worst affected by the Amnesty International, which accuses the officers of extrajudicial killings.

For instance, an unarmed resident of Mathare suburbs in Nairobi was killed last month by police officers in the pretext of imposing a curfew. Over 21 people have died of bullets since the country was placed in a dusk-to-dawn curfew three months ago, reports indicate.