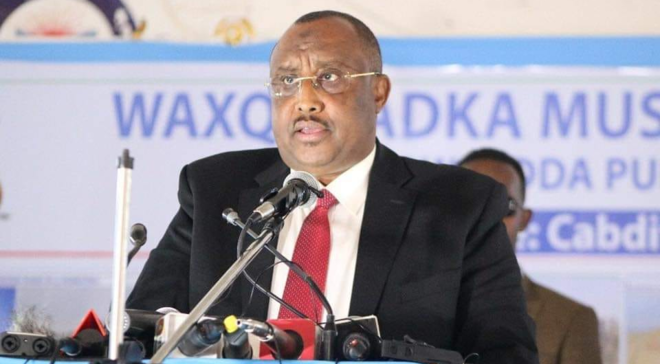 GAROWE, Puntland - The incumbent president of the Puntland in northeastern Somalia, Abdiweli Mohamed Ali "Gaas" announced Tuesday that he will seek re-election in the 2019 election, Garowe Online reports.

The president made the announcement at an event held at the East African Hall in Garowe city and said he will officially kick off his campaign for the presidential election which is scheduled for 8th January 2018.

Ali who has been in office since 2014 faced allegations of corruption and criticism over failure in security in recent years as Al-Shabab and ISIL-linked militants continue to carry out terrorist attacks in the northeastern region.

The term-ending president is facing stiff competition from several candidates, including former Puntland army and Intelligence chiefs in the tight race in which each candidate is expressing confidence of victory.

Ali's rival contenders accused him of creating a political crisis in the state after unveiling Vetting and Dispute Resolution Committee without consulting with Vice President and candidates with the intention to rig the polls.

The VP, Abdihakim Omar Amey rejected the appointment of the eight-member committee as "unilateral and unconstitutional". He lodged a lawsuit over the dispute to the state's high court, but, canceled it afterward.

The outgoing president failed to fulfill his 2014 campaign promises, including completing the democratization process began by his predecessor, Abdirahman Farole to move the state away from a clan-based political system.

For the past years, Puntland defense forces staged a mutiny in several towns, seized the parliament compound in the administrative capital Garowe and blocked nearby streets, protesting about lack of salaries as well as poor working conditions.