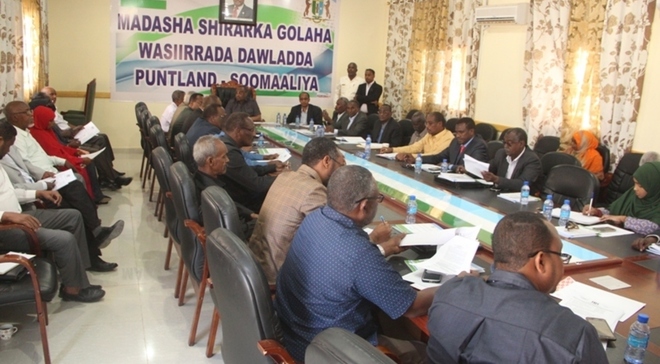 The cabinet raised concerns towards fresh mobilization of the militant group Al Shabaab in south of Mudug and Galgadud regions of Galmudug, and urged security enforcement to remain vigilant to deter attacks from the militant group.

The ministers unanimously approved the recent agreement between Puntland government and CCECC to build the road connecting Eyl to Garowe and reconstruction of Galkayo Airport.

During the meeting, the cabinet reiterated their commitment to fight piracy and stated that government has deployed troops to several coastal villages and arrested suspected pirates without detailing further information about the suspects.

Moreover, Puntland President has called state officials to preserve government's assets, more importantly the vehicles, and indicated that all government's vehicles must be listed in the Ministry of Labor works and transportation. However, the reason behind the statement is unclear, but public has previously raised concerns to the weak policy of current administration to protect region's assets.

President Ali also highlighted about the current drought situation in the region and appealed to the public and international organizations to extends efforts to help drought victims in the region.