Somalia: Renewed fighting between Galmudug and Puntland in Galkayo 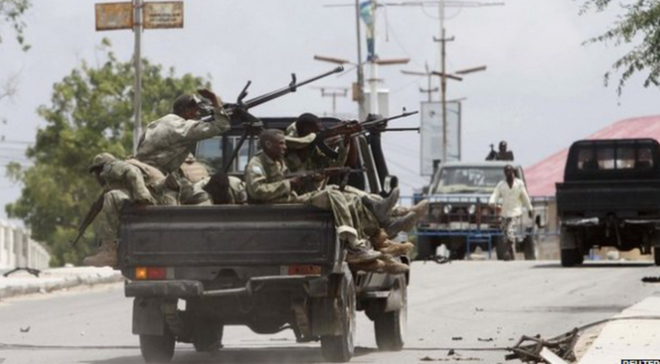 According to local residents, the fighting started Thursday afternoon and reported that both forces have used heavy weapons and anti-aircraft guns in the clashes. The confrontation erupted at the outskirts of the city at a site where Puntland government is building a livestock market, according to an eyewitness.

So far authorities of Puntland and Galmudug haven't released statement on the renewed fighting, which led to the flee of hundreds of residents from the city that is divided between both regions.

Puntland authority last week said the clashes is "politically motivated" and accused Somali government of providing military support to Galmudug militias in their attacks against Puntland troops and civilian.

It also blamed Somali government for fueling tensions in Central Somalia, after clashes between Galmudug and forces loyal to Ahlu Suna Wal Jam'a, but Galmudug authority accused Puntland of inciting instability in the region.

Yesterday, Puntland has announced that scores of Somalia's Intelligence Agency have defected to Puntland, and the soldiers reported they were duped to fight along with Galmudug militias against Puntland forces and civilian.

However, Somali Federal government hasn't responded to the allegations, which is believed it could undermine the relations between the two sides.

The fighting has intensified lately between Puntland and Galmudug due to dispute over contested areas in Mudug region. Galkayo residents were reported to be targeted the most in the sporadic confrontation.

The peace agreement brokered last December, by Somali government, regional states and International community has collapsed this year amid heightened tensions between both regions.