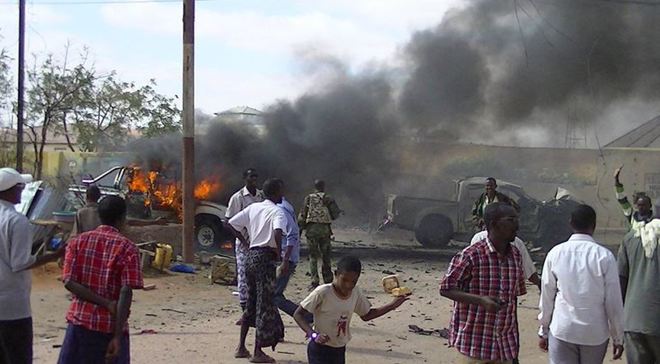 GALKAYO, Somalia - At least six people, including senior Military Commanders, were killed and 8 others wounded in a deadly suicide attack, in central Somalia on Saturday morning, Garowe Online reports.

A witness confirmed to Garowe Online that a suicide bomber approached soldiers at a busy restaurant and detonated explosives strapped to his waist in northern Galkayo, the regional capital of Mudug province.

Two military officers - the Commander-in-chief of a local joint security force identified as Abdihukun Abdullahi Mohamud, known as [Horeeye] and Abdiqani Ahmed Khaire died in the suicide bombing in the central city.

More than four soldiers have been confirmed dead in the attack. The wounded, some in critical condition were immediately taken to a nearby hospital in the Puntland-administered side of Galkayo.

A medical official in the city's hospital told GO that they are coping with several people injured in Saturday's blast, adding the  death toll is feared to rise as some of the victims are listed as "critical."

Islamic extremist group al-Shabab, which is waging an insurgency against Somalia's weak government immediately claimed the responsibility for the bombing, saying it killed 5 army officers.

The group has faced a new military push from the Somali troops backed by AU soldiers and U.S. airstrikes in the south since President Donald Trump approved expanded operations in the country in March 2017.