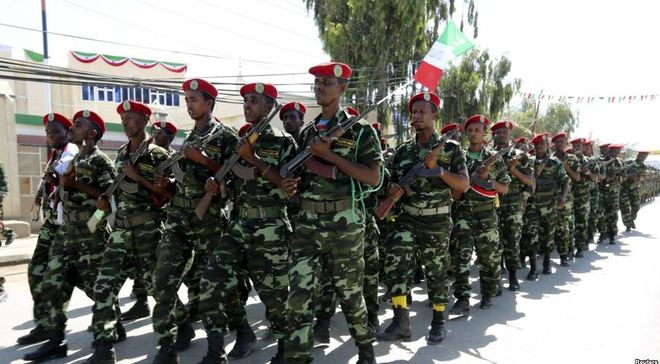 GAROWE, Puntland - Somalia's northeastern semi-autonomous region of Puntland has started building up its Defence forces near Tukaraq town in Sool region, a day after the city was captured by Somaliland troops, Garowe Online reports.

Tension has been rising in the disputed region since Monday as both sides are dispatching "combat-ready" troops to the areas near Tukaraq, about 86Km west of Garowe, Puntland state capital.

Nugal Governor Omar Abdullahi Faraweyne has announced that Puntland has suspended all public transport vehicles from or going to Somaliland as a result of the renewed tension and current troop build-up.

Faraweyne stated the main highway between Las Anod and Garowe will remain closed until further notice and is only permitted for Puntland Defense Force [PDF] units and government motorcades.

The Puntland government blamed the self-declared republic of Somaliland for launching an offensive on its territory to disrupt the historic visit of Somali President Mohamed Abdullahi Farmajo to the region.

In a statement released by the state Presidency on Monday, January 8, Puntland has vowed to respond "in the severest ways possible" to the Somaliland invasion of Tukaraq town.

Somaliland's Minister of Information Abdirahman Abdullahi Farah (Guri-Barwaqo) told reporters in Hargeisa city on Monday that his administration stands firm to defend any attack from Puntland.

Farah has, on the other hand, accused Somali Federal Government of triggering the current hostilities after sending its planning Minister Gamal Mohamed Hassan to the region last week.

The Federal Minister, along with a high-level delegation from Puntland, visited Badhan town in Sanaag region on a mission aimed at how federal government services can be extended to the region and getting first-hand information on the situation of the local people.

The Minster's unannounced visit angered by Somaliland as he became the highest Somali Federal official to visit the region since the collapse of the central government in 1991.

Sool and Sanaag regions in northern Somalia have been contested regions between Somaliland and Puntland for more than a decade as the two administrations are fighting over control.