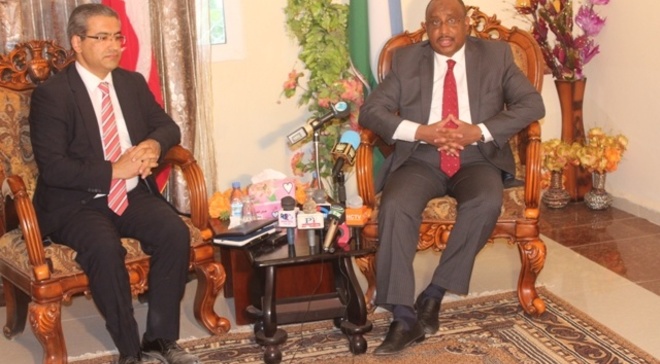 GAROWE, Somalia Nov 4, 2014 (Garowe Online)-Turkish Ambassador to Somalia Olgan Bekar who paid his first visit to the north eastern state of Puntland since being appointed to the post has pledged more support on Tuesday, Garowe Online reports.

Speaking at a joint press conference with President Abdiweli Mohamed Ali at Puntland State House, Olgan commended the state for being a role model for the country’s federalization process, and stressed the need for unique partnership between Turkey and Puntland.

“I believe that Puntland is a role model for the emerging federal states,” said Turkish Ambassador. “I underline that I will carry forward concerted efforts to forge better relations between Turkey and Puntland”.

Meanwhile, on his side President Ali noted that bilateral discussions touched on key areas including economic infrastructure development, agriculture as well as health and education fields.

“We also asked Turkey to evenly distribute Somalia aid to the regional states since the country is in decentralization stage,” he added.