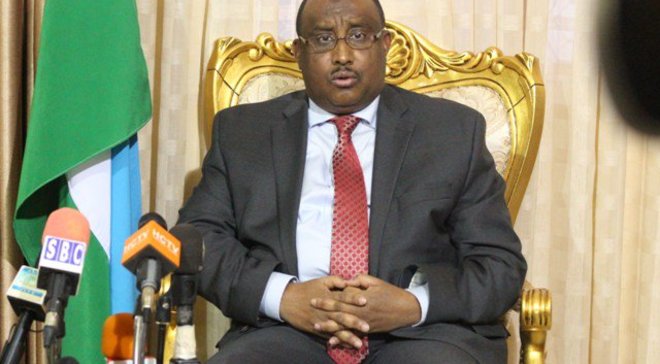 BOSASO, Somalia - The president of Somalia’s northeastern Federal Member State of Puntland, Abdiweli Mohamed Ali “Gaas” has on Monday spoken about the soaring relations with the UAE, Garowe Online reports.

Ali said no UAE trainers left Puntland, describing the claims on Twitter by the VOA journalist Harun Maruf saying that UAE pulled out of its all trainers and military equipment from Bosaso as "baseless propaganda".

The president has defended ties between Puntland and United Arab Emirates, saying the UAE is still committed to continuing its unwavering support to Puntland Maritime Police Force (PMPF).

The UAE is the biggest trading partner of Somalia, and share historic relations, he said.

“Puntland has valuable security cooperation with UAE in the fields of terrorism, fight against piracy, human trafficking and illegal fishing,” said the President.

The President thanked UAE for its commitment to continue support to the PMPF, a vital force for the war on Al-Shabab and the pro-Islamic State militants in the mountainous areas in Bari region.

Formed in 2011, the PMPF has now around 2,000 personnel operating operations at sea and on land preventing, detecting and eradicating piracy, illegal fishing, and other illicit activity off Puntland coast.

Ali’s remarks came hours after the UAE announced it has ended its military training mission in Somalia in protest of the seizure of $9.6 million allocated to support Somali army from an Emirati aircraft at Mogadishu airport, April 8.

On Monday, Somalia's foreign ministry has released a statement changing its position on the seized cash from UAE and declared the money was for military assistance.