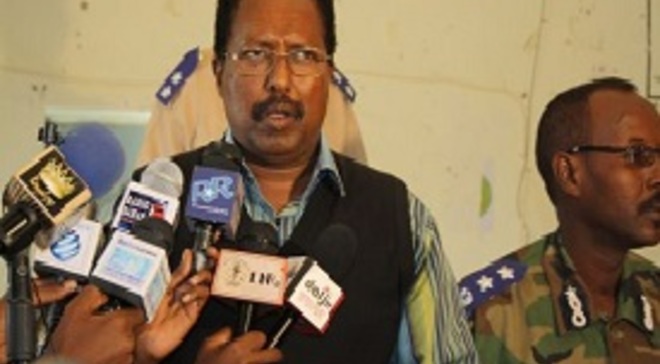 "Puntland security agencies have been put on standby and are on high alert for possible terror attacks. Al Shabaab receives support and warm welcome from Somaliland because Al Shabaab and Somaliland are twins," Puntland Security Minister Hassan Osman Alorre said in an interview with Puntland-based independent station, Radio Garowe on Tuesday.

When asked about the arrival of hundreds of Somaliland troops in Sanaag region and the recent visit to Laasqoray coastal town by Somaliland leader Ahmed Mohamed Mohamud (Siilaanyo), Allore went on to say: "Somaliland [forces] haven't reached Baran, they are in Erigavo and its surroundings. Those areas are roamed by fugitive Al Shabaab members from southern Somalia and as you know Al Shabaab is too hostile to Puntland but Al Shabaab militants have gained free means of access to Puntland from Somaliland. They [Somaliland and Al Shabaab] keep each other safe".

"If he was rather keen on Laasqoray, he would remain in the town. What are those pledges? The native residents are Puntland people," added Security Minister while he was talking about pledges made for Laasqoray residents during Somaliland President's visit.

Meanwhile, speaking to reporters in Somaliland capital of Hargeisa the chairman of Somaliland's House of Elders Salaban Mohamud Adan (Saleban Gaal) noted that Somaliland is not ready to wage war on Puntland, calling on Puntland government officials to work for the common good.

Somaliland and Puntland have been at loggerheads over the ownership of Sool and Sanaag regions, with threats of instability lingering over the region after Somaliland militarily seized Lasanod in October 2007.