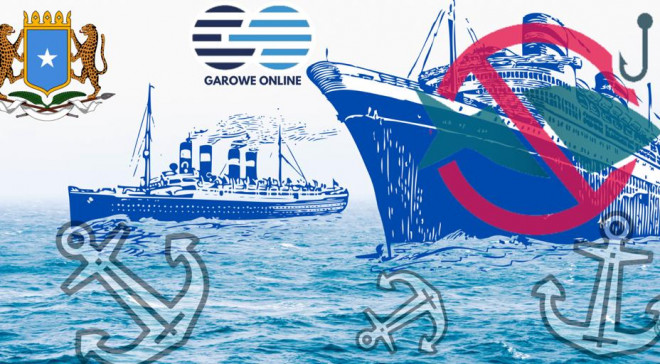 NAIROBI, Kenya - A report published by Global Initiative has implicated senior government officials in Somalia in facilitating lucrative illegal fishing along the Indian Ocean coastline, in what could trigger a political storm in the country, which is already on electioneering period.

The bombshell report titled "Illegal Fishing in Somalia and capture of state institutions" disclosed that the country’s minister of Fisheries and Marine Resources Abdullahi Bidhan Warsame and State Minister of Finance, Mohamud Hayir Ibrahim are at the forefront of the illicit trade.

This now gives a clear insight on how illegal unregulated fishing in Somalia has blown to high levels, giving cartels mainly operating in federal states and the federal government huge sums of money that are meant to benefit locals.

According to the report, the officials are well connected within the government cycles and some take advantage of weak government institutions to break the laws, at times without the knowledge of state governments.

There is no clear fishing law in Somalia and the opaque revenue sharing formula between FGS - Federal Government of Somalia and FMS - the Federal Member States have often given a leeway that is exploited by Unscrupulous businessmen and the officials entrusted to serve for the public. Sometimes back, an agreement was signed between the two entities, which allowed Mogadishu to control up to 30 percent of fishing deals.

Despite the existence of a huge disconnect between FGS and FMS, the Mogadishu administration has been linked largely to the impunity perpetrated in the fishing sector, including licensing of some companies that have integrity questions in the Federal States, including Puntland.

According to a Somali businessman involved in the fisheries sector, Minister Ibrahim is said to protect the fishing companies’ interests at the federal level.

In addition to issuing catch and health certificates, the FGS Ministry of Fisheries and Marine Resources also continued to endorse and legitimize the fishing licenses issued by the Puntland during Abdiweli’s administration to trawlers even though trawling is illegal under Somali law.

The report adds the fishing licenses were signed and stamped by the director-general of the Ministry of Fisheries and Marine Resources, Mohamoud Sheikh Abdullahi Abdirahman in October 2020.

FGS officials implicated in the report are yet to issue rejoinders. Somalia has previously signed treaties on fishing, with the most notable being in Ethiopia. It's here that FGS agreed to control 30 percent of fishing but lack of clear law has often led to clashes between FGS and FMS.

The global body concludes the 57-page report by giving a raft of recommendations, which it insists if adhered to, Somalia can resuscitate the ailing fishing sector which has the potential of generating foreign income to the country.

The minister and other Somali officials accused of involvement in illegal fishing did not respond to the report and so far they did not speak to the media on the issue.