After talks flopped, Farmajo accused of failing leadership in Somalia 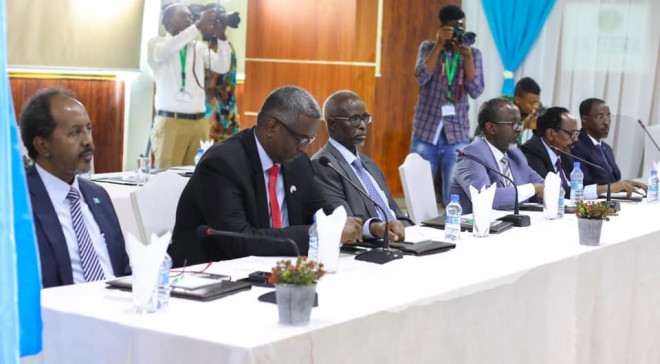 MOGADISHU, Somalia - Political pressure continues to escalate in Somalia, following the latest statement by the Council of Presidential Candidates, who now accuses outgoing President Mohamed Abdullahi Farmajo of failing to show "leadership" at the hour of need.

The tough-worded statement comes hours after the International Community-engineered talks seemingly collapsed on Wednesday, with the Villa Somalia team accusing Jubaland and Puntland of complacency. But the two states insist Presidency is to blame for the current electoral impasse.

The council was formed in November 2020 and is made up of 14 presidential hopefuls. Its members wield significant influence and include two former presidents and the former prime minister. The opposition group strongly rejects President Farmajo's rule, arguing that he is without a legal mandate.

According to the council, Farmajo deliberately sabotaged the 4th Dhusamareeb Summit on February 6th to create a pretense for his early withdrawal from the talks. Farmajo then sought an extension from parliament but was thwarted by lawmakers.

On the night of February 19th, in the run-up to planned electoral talks in Mogadishu, the council noted, Farmajo ordered an attack on two former Somali presidents and a former Speaker of Parliament. The following morning, Farmajo sent security officers to break up peaceful demonstrations held by the CPC and the former Prime Minister.

Also, the council claimed that Farmajo ordered the transfer of security responsibility of the airport from the customs police, which has consistently held that duty, to the Haramcad forces - who are well-known for their attacks on politicians and opposition figures. Farmajo intended to interfere with the security of Puntland and Jubaland's delegations and stymie meetings with politicians, MPs, and other sectors of society.

In what could trigger blame games, the council further said Farmajo disrupted the preliminary meetings between the five regional states that would set the conference's agenda and efforts by members of the international community to bring together the caretaker Prime Minister and FMS leaders.

On March 27th, it noted, as meetings between FGS and FMS were ongoing, the Speaker of Parliament was instructed to force through a two-year extension but was opposed by dissenting MPs who were dead set against the illegality of the move.

It also said that 15 MPs who blocked the extension attempt were banned from attending parliament. Their pictures were ordered to be posted at checkpoints, and instructions were given to security forces to physically prevent them from entering parliament if they defied the order.

According to the team, Farmajo's intention was for the meetings between regional leaders and the federal government not to bear fruit. Farmajo's information minister recorded a message a few days ago accusing the Puntland and Jubbaland state leaders of failing to convene a conference.

The statement ends with the council commending Puntland and Jubaland's leaders for their patience and perseverance, noting that Madobe and Deni have been in Mogadishu for close to a month.