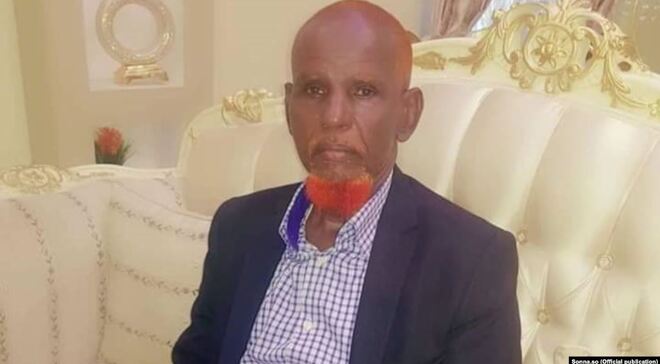 MOGADISHU, Somalia - A regional legislator was on Sunday abducted by Al-Shabaab militants 30 kilometers north of Somalia capital Mogadishu, before being executed, in an attack the Al-Shabaab militants have since taken responsibility, further raising questions about the state of security in the Horn of Africa nation

Mohamed Mohamud Siad, an MP from HirShabelle state, was kidnapped by the militants from a bus between Bal'ad and Jowhar towns, which had been ambushed, before being executed in broad daylight, in a move which exposes security lapses in Somalia.

The legislator died on spot near Yaaqle area ib Middle Shebelle, a region that still has a huge presence of Al-Shabaab militants. The SNA troops have been launching a series of operations within the region that have to some extend neutralized the militants.

Multiple sources intimated to Garowe Online that the regional lawmaker was traveling to Mogadishu at the time of the attack. Civilians in the bus were not armed, an indication that the attack was planned and executed by the militants after perhaps days of training the victim.

In their proxy media outlets, Al-Shabaab termed the MP's death as a "victory against collaborators", adding that: "We shall not tolerate incidents where collaborators antagonize our genuine quest for a united Somalia where we have equal rights".

The militants have been targeting security forces, government officials and civilians believed to be having links with spy agency NISA. Besides execution, the victims are also targeted through IEDs and VBIEDs, and dozens have succumbed in the past one decade.

Last week, the militants executed a leader of people living with disabilities in Southwest, in an attack that has since attracted retribution from several civil rights groups. The victim, Al-Shabaab claimed, had been closely working with NISA, a claim which residents denied.

The attack also comes a day after the militants unleashed in Mogadishu an Baidoa, in twin attacks that targeted tax collection headquarters and a checkpoint where taxes are collected. The Saturday raid left five people dead and scores injured according to state officials.

Regional legislators are crucial in running affairs of federal states in Somalia. Besides making legislations, the MPs also choose regional presidents once every four years and are considered important members of society.

The MP becomes the latest victim of coordinated attacks against elected Lea in Somalia. In April, Nugal Governor Abdisalam Hassan Hersi was killed in Garowe before the militants also eliminated Mudug Governor Muse Nur in Galkayo town which borders Puntland and Galmadug.

Al-Shabaab militants have continued to wreak havoc across Somalia and neighboring Kenya despite the fact that they have been significantly degraded following the ongoing joint military operations across the country. A number of them have since surrendered to authorities.

The group, however, controls large swathes of rural southern and central Somalia, and have since established their headquarters in Jilib town, which is situated in Middle Juba. Ethiopian National Defense Forces [ENDF] is planning to raid the town.

Federal Government of Somalia has often come under criticism over its strategy in the fight against Al-Shabaab. The group, which announced its allegiance to Al-Qaida, has been fighting the weak and fragile UN-backed Somalia government for over a decade now.