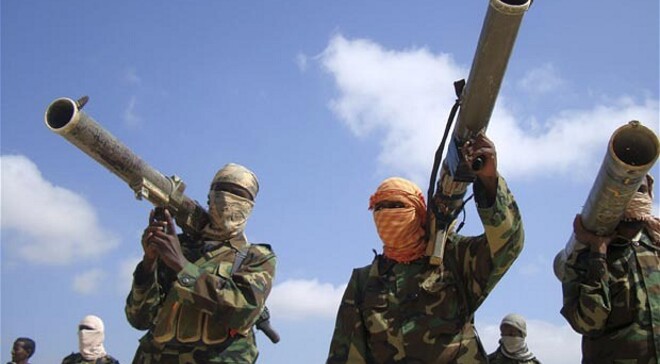 MOGADISHU, Somalia - A contingent of Somali National Army [SNA] attached to the elite Gorgor soldiers was attacked by Al-Shabaab militants on Saturday, reports indicate, amid ongoing operations to wipe out the Al-Qaida linked group which has inflicted terror in the country for almost a decade.

Eyewitnesses said an Improvised Explosive Device[IED] targeting a convoy carrying supplies to the troops was detonated near Awdhegle town in Lower Shabelle, causing massive destruction. The town was recently liberated by government troops from the militants.

The militants also opened fire on the convoy which was guarded by the elite Gorgor solders, leading to a fierce gunfight that lasted for hours. Usually, the group targets supply routes in the country when unleashing terror against government soldiers

Although the government is yet to verify the exact number of casualties, Al-Shabaab claimed that nine soldiers were killed during the melee. However, the group is fond of spreading lies and propaganda to scare its rivals, but it has been suffering heavy casualties in recent months especially in Lower Shebelle.

Gorgor troops are trained by the government of Turkey, which has the largest oversea base in Mogadishu, the Somali capital. Due to close cooperation between Ankara and Mogadishu, Turkey is a key financial partner of the Horn of Africa nation and has regularly supported infrastructural development.

But in return, the Al-Shabaab militants have been targeting Turkish nationals and their allies in Somalia, at times leading to massive destruction. For instance, the group took responsibility for the bomb blast in Mogadishu in December 2019, which left over 90 people among them two Turkish nationals dead.

The attack comes at the time the SNA, African Union Mission Forces, and the US Africa Command are carrying out extensive operations in the Horn of Africa nation to tame the militants. The security agencies have made tremendous progress following the liberation of many towns in Lower Shebelle

But despite the significant reduction of the large-scale attacks, the US Africa Command told the Voice of America that the group has, however, increased use of Vehicle-Born Improvised Devices [VBIDs] when waging attacks. Previously, the group mainly relied on IEDs, which they usually implant along major supply routes.

In addition, the US Africa Command said last week that the Al-Shabaab militants not only targets the Somali National Army [SNA] but have in the recent days shifted attention towards the African Union Mission Forces and the US military team operating in the war-torn nation, which has struggled with instability for several decades.

“We are seeing them targeting not just our Somali partners but also AMISOM partners, Americans, and American interests,” AFRICOM said, noting the recent trend where the group has been targeting military bases across Somalia, further complicating the war against terror.

And the command under the stewardship of General Stephen Townsend now says the Al-Shabaab militants remain the most dangerous terror group across Africa, which threatens America, allies, and partners in the war against terrorism. This is the second time the US labels Al-Shabaab as a dangerous group this year.

“We currently assess that al-Shabaab is the most capable terrorist group on the African continent in terms of the ability to potentially threaten Western interests regionally. Al-Shabaab is a very real and dangerous threat," the Command said, in a statement that could lead to a change of strategy in the fight against terrorism.

Currently, the US has close to 500 servicemen in Somalia with AMISOM also having at least 22,000 troops who are selected from among African countries. The troops have significantly degraded Al-Shabaab besides liberating several strategic towns despite also suffering casualties.

This year, the US Africa Command has waged 46 airstrikes against Al-Shabaab in Somalia, the highest within the same period in as many years. While the Americans have projected their exit by 2027, the AMISOM forces have laid a strategic exit under the Somali Transition Plan [STP] which will be effected from 2021.