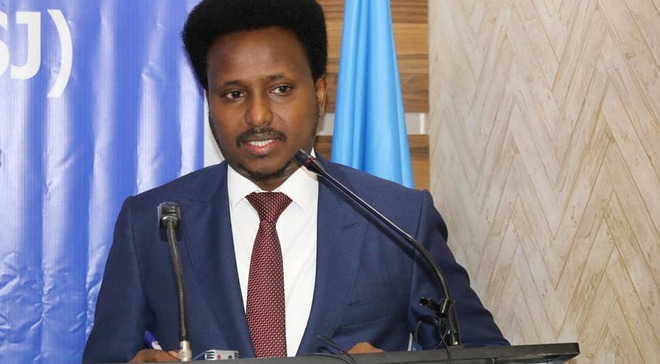 The roadside bomb struck a vehicle transporting Mohamed Aden Kofi, the director of the Immigration department outside the Criminal Investigation Department [C.I.D] at the busy KM-4 junction.

Kofi escaped the attack unhurt, however, some of his security guards and passer-by civilians have sustained wounds in the IED assault, said police officer Capt. Muse Ahmed.

The blast appears to be part of an intensified terror campaign by the Al-Qaeda ally as Somalia heads to parliamentary and presidential polls scheduled to kick off next December and end by February 2021.

Al-Shabaab issued a statement claiming responsibility for the bombing and saying the attack showed that the government has not fully secured “Mogadishu’s major arteries”.

Early this month, Al-Shabaab female bomber killed a senior Somali intelligence official and his bodyguards in the capital after detonated herself at a security checkpoint at the Black Sea junction.

Despite losing ground in southern central parts of the country, including Mogadishu since 2011 to SNA and AU troops, Al-Shabaab has carried attacks in Somalia and neighboring Kenya, which have porous borders and often ad hoc methods for sharing intelligence.

Security analysts say that a spate of recent attacks in Mogadishu has hit unusually sensitive locations, showing the group’s continued ability to mount sophisticated attacks. The extremists have been fighting for more than a decade to topple the Somali government,