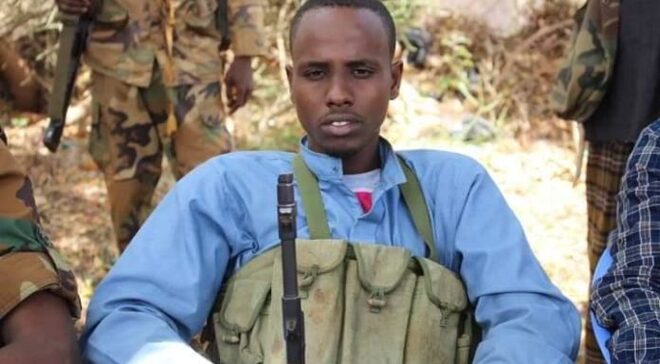 MOGADISHU, Somalia - A top Al-Shabaab commander surrendered to government forces on Wednesday in Somalia, reports have emerged, amid ongoing crackdown targeting the Al-Qaeda linked group which has been antagonizing both the security forces and civilians in the Horn of Africa nation for almost two decades now.

Mohamed Abdi Hassan is said to have surrendered at the government-controlled Qansah Dheere town in the Bay region, ending his years of close association with the Al-Shabaab. He's believed to have been an active member for close to five years and was among top commanders.

According to officials, Abdi, who is in his early 30s, defected from the group in the Southwest state. A photo taken from the incident shows him handing over weapons to the Somali National Army [SNA] who have been conducting operations across the region for months.

Since March, the SNA troops have been launching joint operations with AU forces and the US Africa Command across Somalia, mainly targeting Al-Shabaab and IS-Somalia hideouts. So far, dozens of militants have been killed besides capturing strategic towns in the country.

Further, throughout the same period, dozens of militants have defected to the government, significantly weakening the ability of the group. Defectors usually undergo thorough rehabilitation programs before they are officially repatriated to society.

Abdi is believed to have been conducting sophisticated attacks mainly targeting SNA and the Ethiopian National Defense Forces [ENDF] in Southwest before his shock defection. Currently, he's still under the guidance of the Somali army and would be rehabilitated in the coming weeks.

His defection came just a day after security forces in Somalia conducted operations with the aid of the US Africa Command troops. For instance, on Monday, the troops killed at least six Al-Shabaab militants at Darussalam in the southern part of the country.

But in a rejoinder, the Al-Shabaab militants denied the claims through their proxy media outlets. According to the group, a simultaneous attack launched by them left seven SNA troops dead and a US Navy Seal member critically injured, but there was no immediate evidence to prove their assertions.

On Tuesday, the troops also with the assistance of the US Africa Command, launched another airstrike in Saakow town, killing a notorious Al-Shabaab operative. The militant was identified as Abdulkadir Commandos, a former soldier who joined the group after cutting links with the government.

For over a decade, the group has struggled to topple the fragile UN-backed Somalia government, but their actions have often been met with fierce resistance from government forces. Currently, the UN projects that there could be close to 7,000 active Al-Shabaab fighters in Somalia.