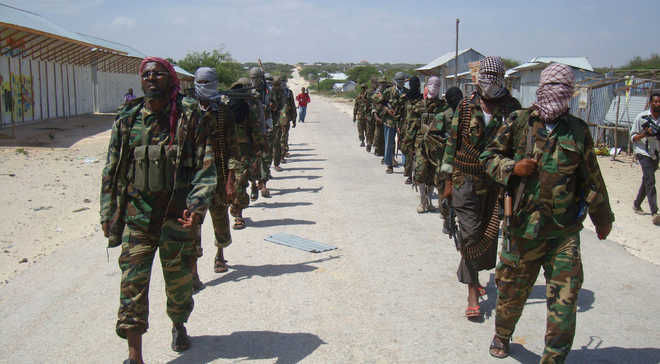 MOGADISHU, Somalia - Three Al-Shabaab militants were on Wednesday killed in the vicinity of Wadajir town, AFRICOM said, as a crackdown against the extremists intensify in Somalia.

In coordination with the Federal Government of Somalia, the airstrike was conducted by US Africa Command forces, targeting Al-Shabaab hideouts.

Wednesday's airstrike is the tenth this year in Southern Somalia, where the militants have used as terrorists recruitment and training base, authorities said.

“Al-Shabaab attacks range from unsophisticated to complex operations, and include assassinations, IEDs and vehicle-borne IED attacks, among other brutal tactics,” he said.

Removing even one of these terrorists from the field, he added, "supports our partners on the ground and prevents that individual terrorist from planning or executing future attacks".

For almost a decade, Al-Shabaab militants have waged numerous attacks in their attempts to destabilize and topple the fragile UN-backed Somalia government.

US forces have been offering aerial support for ground forces in Juba and Shebelle regions, which have been declared terror hotspots.

Initial assessment indicates that only three terrorists were killed, AFRICOM said, adding, "We currently assess no civilians were injured or killed as a result of this airstrike".

There have been complaints by a section of locals and rights groups that such airstrikes are poorly coordinated and end up killing civilians, a claim which has been rebuffed by security forces.

Since January, the US airstrikes have killed dozens of militants in central and southern Somalia, with the Al-Shabaab also losing weapons in Jilib town following massive bombardments.

The raid took place a few hours after the militants briefly seized El-Salini military base in Lower Shebelle and another attack at Qoryoley town, Southwest of Mogadishu.

At least 20 SNA soldiers were killed in the military base, with Al-Shabaab also suffering 27 deaths in both attacks, authorities said.

Somalia remains key to the security environment of East Africa, and its long-term stability is important to advancing U.S. interests in the region, AFRICOM added.

The US said: "We will continue to work together on our support of the Federal Government of Somalia in its effort to bring improved governance."

Since losing their grip in the capital Mogadishu in 2011, the militants have retreated to remote villages where they offer basic services and sustain tax collection.