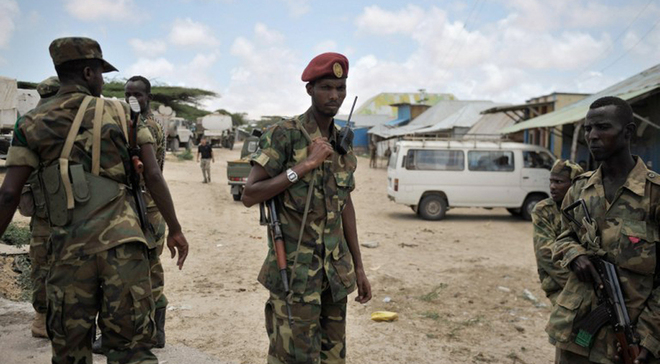 BAIDOA, Somalia - At least two Al-Shabaab militants were killed on Monday in Awdinle, 30 kilometers West of Baidoa, the regional administrative capital of Southwest, in an offensive carried out by a contingent of Somali National Army [SNA], further showcasing the ability to crush the militants.

The SNA 60th Division Commander Gen. Mohamed Sheikh told reporters that dozens of militants were also captured during the operation, which was part of an ongoing countrywide crackdown against the Somalia-based militants, who have been wreaking havoc in the Horn of Africa nation.

According to Sheikh, the operation targeted hideouts for the militants in the Bay region, which has been under the control of the militants for a couple of years now, adding that "the operation was successful and we thank our partners for the support".

Troops from SNA descended on the hideouts following intelligence tips and killed two on the spot. Those captured will undergo counseling before they are repatriated to the community to lead their normal lives, Gen. Sheikh said, adding that the operation will continue.

"Our troops acted on intelligence and we managed to kill two Al-Shabaab militants within the Bay region. This was a successful outing given that we also managed to capture dozens of them who are now under our custody," said the army officer, who has been leading the operations in Lower Shebelle.

He added: "We have a clear transition policy. We are fighting an ideological war so killing is not enough. We are going to counsel them and successfully have them repatriated to society as we continue to pursue those who managed to escape."

The military general asked residents to continue cooperating with SNA soldiers across the country, adding that a safe and secure Somalia would help the government to counter violent extremism with ease compared to the current situation where it is "hard to know who is Al-Shabaab and who is not".

Bay region, he added, has been earmarked as a focal point where the military will trace the militants, who have been targeting innocent civilians, security forces, and senior government officials who do not subscribe to their "archaic" strategy.

"This is a war which we can win together," said the officer, noting that: "They are losing their traditional strongholds due to spirited efforts from the military forces, we shall overcome soon. We all need a safe and secure Somalia for all of us."

For the last four months, SNA troops have been waging raids against the militants with the help of AMISOM and the US Africa Command forces in the country. Some of the targeted regions include Lower and Middle Shebelle, with sections of Middle and Lower Jubba also on the radar.

The team has managed to seize a number of towns previously under the Al-Shabaab rule including Janaale, a town located in Lower Shebelle. The UN Security Council termed the March victory as a "milestone for the people of Somalia" during a meeting in New York City.

Elsewhere, one soldier attached to the African Union Mission in Somalia died on Monday following a clash between two security forces within HirShabelle with authorities saying the fiasco was triggered by a land ownership dispute between two rival clans.

The soldier, whose identity was not immediately revealed, was among four people who had been wounded and was rushed to a nearby facility for treatment. Reports indicate that the army officer tried to intervene but was caught in the middle of a gunfight between the two parties.

Cases of clashes between security forces are common in Somalia, a country whose force is primarily recruited from among clans, whose historical differences at times are manifested during the official duties like Monday's tragic incidents.

The Somali National Army is set to assume security responsibilities from next year once AMISOM leaves. Under the current Somali Transition Plan, all AMISOM troops are expected to withdraw from the country not later than February next year.